Alternative Rides: Any smaller section of the loop 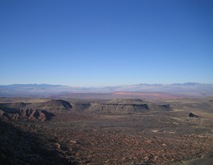 Our 3rd and final St. George-area Botany Ride is on the Bench level, which we zipped past on our way from St. George up to Guacamole. Again, I’ve stolen the map from utahmountainbiking.com, but down below I’ve blown it up into 2 separate maps and added notes and features. See utahmountainbiking.com for route description and access.

Here are 6 great reasons to do this ride. Yes, SIX- count ‘em, baby!

First, if you like fast singletrack, you will love this ride. It features a long- seemingly endless- shallow-grade descent on which you can repeatedly hit 25-30 mph. Additionally, on the Hurricane Rim section, the ride features several shorter, but great, fast descents.

Second, it has awesome views, both up- Little Creek, Gooseberry, Zion, Pine Valley, the Virgin and Beaver Dam Mountains- and down- into 2 deep, dramatic gorges (Virgin and Gould.)

Third, it is a great night-ride, and as we all know, night-riding is absolutely the most thrilling thing you can do without your spouse/SO. The generally smooth singletracks are a nice break from the pretty technical riding up on the mesas, and most riders (myself included) are more comfortable night-riding these trails than Gooseberry Mesa. The only thing cooler than ripping down a smooth, winding singletrack at 25mph is doing it in the dark.

Fourth, in late April/early May it is one of the best wildflower rides anywhere, and was in fact the subject of this post back during Monocot Week (Man, was that a great week or what?)

Fifth, it’s got optional exposure. If you love riding fast along terrifying cliff edges (why yes, as a matter of fact I do, which is probably why my life was once saved by a bit o’ shrubbery) then you can add the thrill of your life by starting/ending this ride at the lower JEM trailhead, and riding it as a cherry-stem. The stem will give you a nice little spark of excitement to start the ride, as you pedal the edge of the Virgin River Gorge, and when you return you’ll be tilted just downhill enough to really get a charge as you zip along the Brink Of Death back to the trailhead. And if you return this way on a night ride, you just might pee your pants.

Sixth, and to the point of this post, it’s got some awesome botany going on.

But the interesting thing about the botany on the JEM/Gould Loop isn’t any fantastic or rare new plant. In fact, every plant on this ride- and we’re talking shrubs, not trees, here- we’ve already seen before, either down on the Floor, or up on the Mesa. But what makes this ride really, really botanically cool is that it is the only ride I know of on which the rider transitions- more than once- between the Mojave and Great Basin deserts. All that stuff I went on about, on “hot” vs. “cold” deserts, and the boundary, and the transition zone, yada yada, it happens right here, on this ride. And the easy way to track this transition is by our old friend, Creosote. When we’re riding through Creosote, we’re in the Mojave; when the Creosote’s absent, we’re generally out of it.

Explanation of this section: Follow along on the 2 maps. The bold blue numbers correspond to the same numbered locations on the maps. Direction is indicated by the big blue arrows.

If we start at the lower/Northern JEM trailhead (1) take the stem out to the loop, then start counterclockwise on the Hurricane Rim trail (2) we’re just barely out of the Mojave. But soon, as we roll up and down hills and in and out of minor draws we’ll hit isolated stands of Creosote, where local aspect and elevation conditions support outlier “Mojave pockets”. (3) 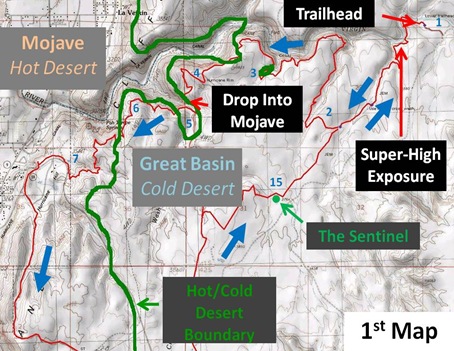 After the high point along Hurricane Rim (“Goose”-something, I forget) (4) we descend into China Wash (5), a deep canyon filled with Creosote. If conditions are right, we’ll smell it as we ride through, like I did a couple weekends back on the night-ride with Clean-Colin. As we climb back up out of the wash we leave it behind momentarily (6), but as we roll down the final descent to the Hurricane Rim trailhead on Highway 59 (7), it’s everywhere around us, and we’re back smack in the Mojave.

Now switch to Map 2. (This is fun! I should do all my maps like this!) 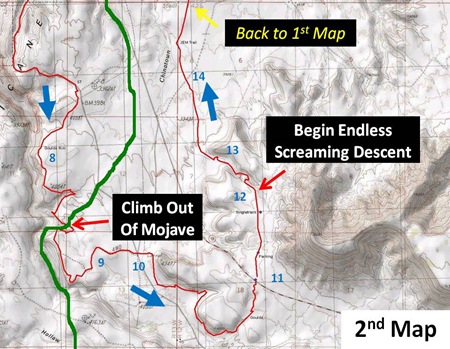 As we climb Gould Rim and hug the edge of spectacular Gould Wash Gorge (8), we’re still well in the Mojave, with Creosote all around. But after the big climb before the dirt road section (9), it disappears, and a couple of miles later when we pick up the singletrack again (10), we’re back in the Cold, or Great Basin Desert.

Tangent: To be clear, when I say we’re in the “Great Basin Desert”, I’m using the term to describe the general flora across the Great Basin and Colorado Plateau. We’re not actually in the hydrographic Great Basin, and we haven’t been since shortly after we passed Cedar City on the drive down. I’ll use the term “Cold Desert” from here on to avoid confusion. 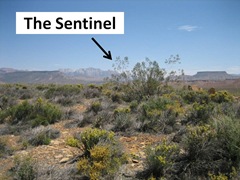 But about ¾ of the way down JEM, a few hundred yards ahead alongside the trail, a lone large bush appears, towering above the surrounding low shrubs (15). As we get close we see it’s a Creosote- the loneliest, highest (and probably coldest) Creosote I’ve ever seen. I always keep an eye out for this guy as I descend; I even have a name for him: The Sentinel. The Sentinel stands at the very edge of his world, always looking out and up and the world he and his brothers can never manage to reach.

It’s cool enough to do such a great ride while flirting with the Hot/Cold desert boundary. But there’s a bigger, more awesome story going on if we step back and look at the boundary in scale for a moment.

In yesterday’s post I included a photo of me riding down a steep slickrock ramp on Guacamole. If you clicked on that photo, you probably noticed how grainy and crappy a photo it was.

That’s because it was a still from a video that Organic-Chemistry-Rick (guy who never reads my blog) took. And while the photo gives you a bit of a feel for the ride, it doesn’t give you anywhere near as good a feel as you’d get if you saw the still in the context of the whole video. In the photo alone you can’t see where I came from, or where I’m heading, or how fast I’m going, or even whether I managed to stay upright over the next 10 feet (I did), but in the video all of those things are clear.

Similarly, when we ride JEM/Gould Loop, we’re really only seeing a “still” of the Hot/Cold desert boundary.

Creosote has only reached its present range in the last several thousand years. It showed up in North America 18,000 years ago, then rapidly root-cloned and seeded its way Northward with the end of the last ice age. It likely swept even further North and higher up than its present range during the Altithermal (when Turbinella flourished in the Wasatch) and then rolled back, like a receding wave, to its current limit.

The few thousand years that it’s been pretty much where it is today is simply a pause between waves when viewed in proper scale, and as I look at the Sentinel, what I wonder is this: is he a last holdout of a retreating army being driven back to the Floor? Or is he the vanguard of a coming storm- a storm perhaps assisted by our own climate-warming activities- a mighty, sweeping, dark-olive wave of unstoppable power and fragrant beauty, both wonderful and terrible, poised to crest up and over the benches, onto the mesas, even up along I-15 to Cedar City and into the Great Basin Northwards.