How To Keep Phil From Burning His House Down

Yes, I know I promised the Official WTWWU Suggested Holiday Gift List today, but a matter of urgent importance came up. In a follow-on comment to yesterday’s post on Christmas Trees and Gondwanaland, my brother- let’s call him “Phil”- asked why Christmas trees are so flammable. Since my brother is the kind of absolutely-brilliant-but-vague guy who I could totally see listening to bootleg “Luna” MP3s on headphones while the tree caught on fire in the next room, I thought his concern worthy of a quick post.

About 500 Christmas trees per year catch on fire in the US, killing around 30 people annually*. The greatest danger of the tree catching on fire is not from something directly igniting the tree, but from stuff immediately adjacent to, or below the tree- such as gift wrapping- catching on fire. A strong bonfire at the base of even a well-hydrated tree can quickly ignite the crown (just like a strong, out-of-control forest fire can light the crown of a rooted tree in the forest.)

In fact, it’s almost impossible to ignite a fully-hydrated tree by holding a match or a live wire to it.

Tangent: And it’s been tried. Apparently back in the 90’s, some Department of Public Safety folks up in Minnesota ran whole bunch of experiments trying to light Christmas trees on fire using matches, cigarette lighters, an overheated wire and a blowtorch. (Man, how do I apply for a job at the Minnesota DPS?)

But when a tree gets dry, it’s another story.

OK, to review: plants get water from their roots to their leaves via a specialized tissue called xylem. (We originally talked about Standard Wood Architecture in this post.) In a tree truck, the xylem sits outside the sapwood, but inside the cambium layer. Xylem cells form long, vertical, straw-like tube to draw water up through the truck, out along the limbs, and eventually into the leaves.

There’s no “pump” or “muscle” in a tree; what pulls water up is transpirational pull, which works like this: water molecules evaporate from a leaf. But as they do so, the water molecules immediately behind and adjacent to them are pulled up and forward by surface tension of water molecules sticking together. Surface tension is what causes water to bead up into drops when you spill it on a desk, which you can see in this First Exceptionally Helpful Educational Video, which I personally filmed and produced- at great effort and expense- for this post. Surface tension works the way it does in water (and other liquids) because the individual water molecules are attracted to one another more than they are attracted to the gas molecules of the atmosphere immediately outside of the liquid/gas boundary. (Go here if you want to deep-end on details.) In this Second Exceptionally Helpful Educational Video, you can see the surface tension at work: As my finger extends the air/water boundary, water molecules are pulled along from behind my finger.

Cool Factoid About Surface Tension: Surface tension strength decreases with temperature, which a reason that washing clothes in hot water is more effective; the hotter water breaks into smaller droplets more easily and better penetrates the fabrics. Bonus Speculation: I wonder if this heat-weakened surface tension could be an additional cause of stress for plants in hot deserts?

OK, so when we cut a tree off from its roots, the thousands of transpiring water columns in the xylem tubes are in immediate danger of being broken. And when that happens, the tree starts drying rapidly. Dryness of a tree is measured by what is called foliar moisture content (FMC). When a tree’s leaves/needles are fully hydrated, it’s at 100% FMC, and almost impossible to ignite directly. But below 50% FMC, you can light a tree on fire directly from a match, and below 20% FMC a tree is pretty much a tinderbox.

But it gets worse. Once a tree is below around 80% FMC, it gets into a Dessication Death Spiral, and will continue to dry out, even if it’s standing in water. This is because embolisms have already formed in the water columns and the transpirational pull is failing in a critical portion of xylem tubes. 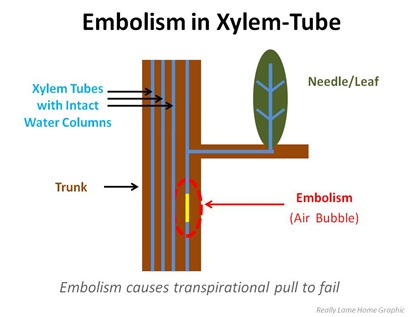 So the most important thing is to get your tree in water fast, and keep it in water.

Second, cut the bottom few inches off before putting the tree in water. By the time you get that tree home the xylem tubes are pretty well dried-out in that exposed stump, and if you stick in water without cutting you’ll introduce embolisms straightaway.

Phil also asked if some Christmas tree types are more or less flammable than others. In the Minnesota study it looked as though Blue Spruce took about twice as long to ignite as Balsam Fir (way to go Andrea!), but I can’t say whether this applies to all Spruces and all Firs. Also, Spruce Christmas trees lose their needles much more quickly than Fir Christmas trees, so pick your poison I guess…

And finally, Phil requested that I post more pics of the Dark Pope, to which my response is: Phil, that would be an awesome theme for your own blog. In fact, I just checked, and www.darkpope.blogspot.com is still available.

Next Up: Really, the Official WTWWU Suggested Holiday Gift List is coming!

Interesting and educational - thanks!

If plain water is the best for cut trees, does the same go for flowers? I always add that packet of flower food to the water for cut flowers, but I'm deducing it's better to use only water. Is this correct?

Jodie- I'm so proud of you! (And I'm particularly moved that someone actually listens to my advice!) Good for you guys- I hope your Christmas smells wonderful.

KanyonKris- that's a great question, and I don't have quick, clean answer. I was unable to find any studies online comparing absorption rates of cut flowers with vs. without plant food, although Wikipedia references an Irish study that apparently showed pure glucose worked better than plant food.

Plant food packets have 3 components: A biocide, designed to kill fungi that might clog up xylem tubes, some kind of sugar, and some kind of acidifier, to lower the water's pH, which is supposed to increase absorption. Many of the traditional home treatments- putting bleach, aspirin, or a copper penny in the water- supposedly act as acidifiers. But in excess, sugars can fuel fungal growth, and too low a pH can burn plant tissues.

So I don't have a clean answer... but I feel an experiment coming on...

And to think that all these years I was only listening to Luna because their quiet, gentle grooves wouldn't drown-out the sound of a potentially sizzling Christmas tree. It's nothing but Motorhead for me, now. Thanks Watcher.

Serious question: Does the surface-tension issue mean it's always better to water plants/trees with the coldest-possible water source?

Phil: No, pretty much all sources recommend room temp water, like 60-70 degrees. Remember, most vascular plants won't try to photosynthesize below about 50F (I mentioned this in the moss post last month- see "First Cool Thing") so chilling the plant with, say 40 degree water, probably works against you in most cases.

KanyonKris: I thought of something else on the drive home tonight, which may or may not be significant to your question. This gets complicated, and probably deserves a post of its own, but at a high level, the xylem of conifers and angiosperms has a big difference. (Your Christmas tree = conifer, cut flowers = angionsperms.) The xylem of conifers is composed entirely of cells called tracheids. The xylem of angiosperms is composed of both tracheids and cells called vessel elements, which comprise "vessels". Vessels are way more open and unobstructed than tracheids, and as a result, angiosperms transfer water much more efficiently than conifers, which is a big reason why angiosperms grow so much faster under favorable conditions. So- and this is only conjecture- the various particles in plant food might not impede water transfer through the vessel+tracheid xylem of cut flowers as much as they do the tracheid-only xylem of conifers.

And all along I thought I just liked the blue spruce because it was pretty. Turns out I was being practical after all.

Watcher - Your points make sense. It sounds like the ingredients in "flower food" have benefit so I'll continue to use it until I hear otherwise. The discussion has been interesting, thanks!