All About Elms, Beetles and Fungi

Note: The post is better if you read Monday’s post first, for the personal background and mildly sentimental-but-corny segue into this detail-heavy post. So if you missed that post, check it out first for context, or you can blow it off and just read this one (that’s what I’d do) if you just want the facts.

So having taken 6 years to figure out what the big tree in my front yard was, I decided to learn a little bit about it and its strange story.

The genus Ulmus includes over 30 different species, 6 of which are native to North America. In addition, at least 3 Eurasian elms- the English, Chinese and Siberian Elms- have been introduced and subsequently escaped cultivation. Ulmus is part of a larger Elm family, Ulmaceae. Though we haven’t looked at any other Ulmaceae members this year, the various Hackberries are other members of this family with which you might be familiar.

Of the North American species, the American Elm is the widest-ranging (range map left), native from the East coast West to Texas and the Dakotas. Elm is a Wind-Wind tree; wind-pollinated, with distinctive, almost-circular samaras that look like a miniaturized cross between a flying saucer and a cloven hoof. (pic below, right) It also reproduces extensively by root-cloning, and sure enough every summer I clip out about a dozen clones within a 10 foot radius of the tree. Unlike many TSW trees, Elms have no glamorous fall displays of color. The leaves seem to either stay green or get just a titch duller until the Fall, and they seem not to fall until “bullied” down by wind or snow.

But Elms grow tall and strong, and for over a century they were planted as shade trees along boulevards and in parks across the country, both in and out of their native range. (As were English Elms , U. procera, across Europe.)

Dutch Elm disease is a fungal disease introduced to Elms by Elm Bark Beetles (EBB). We’ve talked about Bark Beetles before. Apparently burrowing into trees is a good way to make a living, as there are hundreds of different species of Bark Beetles, across a number of genera. 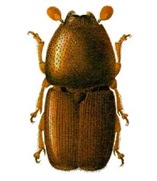 All the Bark Beetles of which I’m aware are part of the wildly successful Curculionoidea family and thus are fairly closely-related to Weevils. There are 2 main EBBs responsible for the disease transmission in North America: Hylurgopinus rufipes, (pic above left, looking way scary)which is our “native” EBB, and Scolytus multistriatus, (pic right, looking somewhat abstract and hence much less scary) which is a European “import.” (The “import” is found in Utah, but the “native” is not.)

The beetles carry fungal spores with them which grow and spread in the tree. But before we go any further, this is probably a good time to talk about what exactly is a fungus.

Given all the plants we’ve talked about this year, and the literally thousands of plant-fungal relationships- both symbiotic and parasitic- happening all the time all around us, it’s almost a crime that I haven’t yet done a post on fungi.

Most people, if they think of fungi at all, think of them as either mushrooms and/or some type of plant. Neither is correct. Fungi are a whole other deal, the third great kingdom of multicellular life on this planet. Fungi are neither plant nor animal, though surprisingly, more closely related to animals than to plants. And a mushroom is just the fruiting body of a fungus. Calling a mushroom a fungus is like calling a pine cone a tree.

The reason people have a tough time getting their heads around fungi, is that unlike plants and animals, fungi don’t have a real, standalone “body” that you can easily look at or touch or move. Instead the “body” of a fungus is a network of countless tiny filaments, call hyphae (pic right), that grow out through soil or wood, or sometimes even flesh (think athlete’s foot.) As a kingdom, they’re wildly successful, varied and complex. 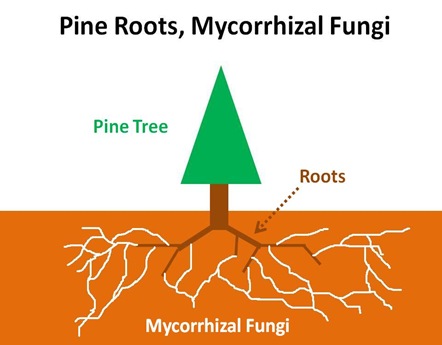 The hyphae of these fungi serve as virtual extensions of root networks, allowing the plant to access water over a much greater area than it could do with roots alone. The fungi in turn feed off of carbohydrates manufactured by photosynthesis and delivered to the roots via the plant’s vascular system.

The fungus- or actually fungi, as we’ll see in a moment- responsible for Dutch Elm disease belongs to a genus called Ophiostoma. Once introduced by the beetles, Ophiostoma hyphae begin to grow within the wood of the Elm. The tree reacts by effectively plugging up its own xylem tubes in an attempt to block further fungal growth, but in doing so eventually cuts off its own water supply and dies limb-by-limb, root-by-root. In a sense, death by Dutch Elm disease is an auto-immune system malfunction.

Dutch Elm disease appears to have originated out of Asia (Man, I am telling you again like all the nasty stuff comes from Asia) and what’s particularly interesting about it is that it seems to have struck Europe and North America in two distinct waves- the first one bad, the second one worse.

The first wave appeared in Europe in 1910 and North American in 1928 and was caused by Ophiostoma ulmi. The second wave, which appeared in the 1940’s and did the most damage in the 1960’s, was caused by a different species, the ultra-virulent O. novo-ulmi, and it’s been conjectured (though not proven) that O. novo-ulmi was originally a hybrid between O. ulmi and another Asian species, O. himal-ulmi, and that such a hybridization- if it occurred- might have been facilitated by human trade in wood and wood-based products.

Botanists have worked hard to breed strains of Elms that are resistant to the disease, and there have been some signs of success. There have also been repeated efforts to hybridize American Elms with Siberian Elms (pic left), which show a bit more resistance to the fungal attacks, but all such attempts have been a bust, probably because U. americana, alone among the Elms, is chromosomally tetraploid, with 56 chromosomes vs. 28 for all other Elm species. (See this post for an explanation of polyploidy in plants. It’s way cool. Seriously.)

American Elms aren’t extinct; they’re just pretty darn rare in their original range. New trees repeatedly shoot up from surviving root networks, sadly often becoming re-infected when they reach tree-size and are visited by beetles. But outside of their original range, Elms are doing OK in some spots. Idaho in particular appears to be largely disease-free, and my house is just about a 90 minute drive from the Idaho border…

But there’s the hint of a possible third wave of disaster; in 2003, a third EBB, the Banded Elm Bark Beetle, Scolytus schevyrewi, (pic right- you can see the “band” across its back) a native of Eastern and Central Asia (Hello? Yes, Asia, again!), was found in Colorado. Since then it’s appeared in over 20 states (including Utah.) Though it’s yet unclear whether the Banded EBB transmits O. novo-ulmi as effectively as its cousins, the scary thing about the newcomer is this: it tolerates much colder winters. Like the kind of winters we get here in Utah…

Nothing’s for certain. The Front Yard Elm may or may not end up outliving me, but I’ll enjoy it while it’s here. Decades after the one childhood tree story that stuck with me, I find that I’m living in the shade of that same story, and that it’s the very tree that bore the last green leaves of my year. That’s a cool ending to a great living year.

Perhaps its just me, but I find this fungi disturbing. I was just much more comfortable with it being the mushroom than an un-embodied (ok, not really a word) "force" so to speak. With that said, I have some loathsome siberian elms that could use some fatal fungi...

I like your "Fungal Force" concept. My next blog will be www.fungalforce.blogspot.com. Oh wait, my next blog is the Bug Blog. Well, the one after then...