Today begins Dark Week, my admittedly unimaginative name for the darkest week of the year, at least for those of us in the Northern Hemisphere.

Side note: Does anybody from the Southern hemisphere ever read this blog? If so I’d really like to know. Please comment, or if you’re shy, email me at adventurebotanist@yahoo.com. (And don’t worry I won’t ask you to send me pictures of kangaroos or a video of the water draining down the sink…)

Over the next 168 hours, here in Salt Lake the Sun will be below the horizon for about 103 hours and 15 minutes. Actually, more like 115 or so hours depending on where in the valley you live, due to the horizon-limiting Wasatch Mountains to the East and the Oquirrhs to the West. During that time, the Sun will never rise more than 27 degrees above the horizon. Think about that, and while you’re at it, put a note in your calendar right now before you forget for this Sunday, at 12:25PM. That’s when the Sun will be at its highest point in the sky on December 21, the day of the solstice, which will only be 25.75 degrees above the Southern horizon here in Salt Lake.

Side Note: I calculated all the times and angles in this post for Salt Lake City, specifically up around 800S or so, which is ~latitude 40.75N. If you live elsewhere you’ll need to do your own math, but this site may help. 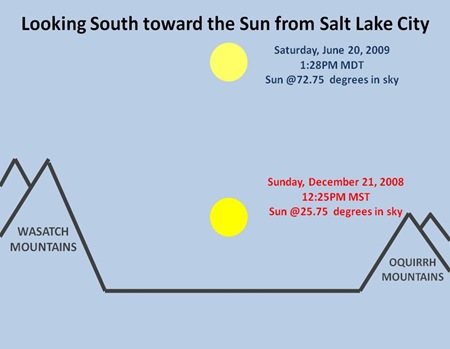 It’s amazing how much the world changes in just 6 months. If you have a moment (and of course you have a moment or you’d be working instead of screwing around reading my blog), go back in the archive of this blog and open one of the posts from mid to late June. (I like this one.) Check out what was going on then; it’s simply incredible that this is the same place. And all because the planet is tilted 23.5 degrees.

Deep-End-Side-Note: The axial tilt of the Earth is 23.5 degrees right now. It actually ranges between 22.1 and 24.5 degrees over the course of a recurring 42,000 year cycle. Right now the axial tilt is decreasing. In addition, just to make things even more confusing, there’s another, lesser, “wobble” in the Earth’s rotation that causes a slight variance in the axial tilt over an 18–and-a-half year cycle. Got it?

It’s always interesting to think of what the world would be like, how life would have turned out, if the tilt were different. Mercury, Venus and Jupiter have virtually no axial tilt at all. If Earth had no axial tilt, there’d be no seasons. 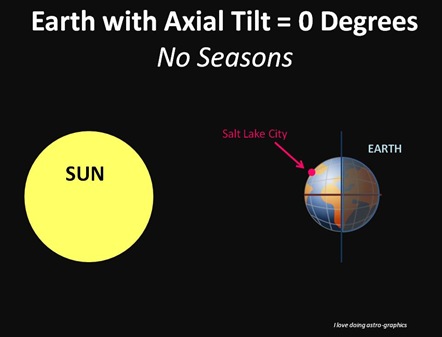 My guess is that Salt Lake would be a weird, super-lush-looking valley full of leafy evergreen trees that never needed to prepare for a real freeze, but with daytime highs only in the 50’s and night-time low’s in the 30’s, all year-round, year after year.

Even weirder is what Earth would be like if our axial tilt were more like that of Uranus. The axial tilt of that planet is 97 degrees, which means that its axis of rotation is roughly parallel to the solar orbital plane. If Earth were tilted at 90-something degrees, our seasons would be a world-wide extreme version of seasons at the North and South poles. Here in Salt Lake, Spring and Fall would be more or less like they are now, with roughly equal-length days and nights. 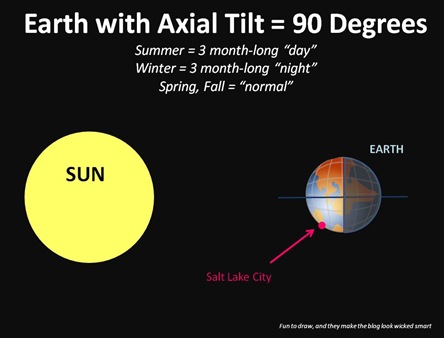 But Summer would be one endless 2 or 3 month-long “day”, with the sun traveling in a circle around the valley, up about 40 or 50 degrees above the horizon. Winter would be a 2 or 3 month-long, “night”. Of course the stars would continue to rise and set on a 24-hour cycle, but otherwise the endless darkness would continue for weeks unbroken, with a chill I can’t even imagine. What kinds of plants would live in the Salt Lake Valley of such an Earth is a mind-bender to even think about.

Tangent: One possibility would be an abundance of “Resurrection”-type plants. “Resurrection Plant” is the term given to a several very different plants, all native to harsh deserts, that appear dead and shriveled during times of drought, but become lush and green when the rains return.

The classic “Resurrection Plant” is the “rose of Jericho”, Anastatica hierochuntica,(pic above, right =dry/shriveled, pic left = lush/green) native to North Africa and the Middle East. It’s a dicot shrub; the most closely-related thing to it we’ve looked at this year here in Utah would be (I think) the Richardson’s and Sticky Geraniums that were all over the place in the Wasatch this past summer.

Closer to home, the name “Resurrection Plant” is applied to Selaginella lepidophylla, (pic right) native to the Chihuahan desert of West Texas, New Mexico and Chihuahua, MX does the same play-dead trick, which it evolved completely independently.( S. lepidophylla isn’t even an angiosperm, but rather a Lycophyte, a whole other division of plants I haven’t even touched upon yet, but plan to soon.)

I always feel a sense of “made it” when Dark Week finishes. The worst of Winter is still ahead, but every day the Sun will come up just a few seconds earlier and linger just a few seconds longer. And even through the snow and ice and inversions those few extra seconds every day keep adding up, making themselves noticed, hinting at the living year to come.

This Sunday, when your appointment alarm goes off, go outside and look at how high the Sun is. Take a photo, or try to remember its position relative to where you are. Then, before you forget, make another appointment for Saturday, June 20, 2009 at 1:29PM, and make a commitment to yourself to be in the same place as you were this Sunday and compare the height of the Sun to the photo you took or the position you remembered. The difference will blow you away. 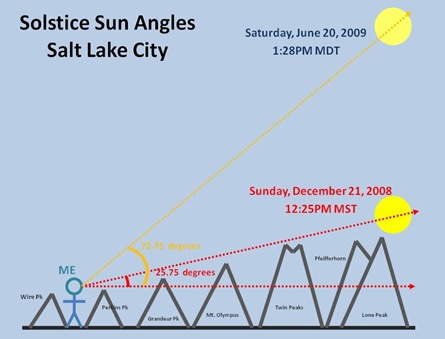 Alternative: You can do a similar- and arguably more “watch-able” comparison by watching sunsets from the same spot on both December 21 and June 20. This works well if you watch from a spot with a view of clear landmarks on the Western horizon, such as the Oquirrh Mountains.

Note #1: For Summer solstice “Sun-Noon”, the same time on Sunday, June 21 will work just as well. The actual 2009 summer solstice time in Salt Lake is just 15 minutes before midnight, so it’s really sixes which day is the “solstice day”. This will help out those of you who- like me- plan to be racing the High Uintas Classic on June 20.

Note#2: Why look up at 12:25PM or 1:28PM? Why not at noon? Because in almost all places, “Sun-Noon” does not equal “Time-Noon”. Salt Lake is way far West in the Mountain time zone, so our clock-times are always artificially “early” relative to the Sun. The 1 hour difference between Sun-Noon on 12/21 and Sun-Noon on 6/20 is due to Daylight Savings time. The last 3 minutes of difference is due to the “finer point” peculiarities of the Earth’s motion. (Specifically the rotational wobbles described above, an elliptical orbit, and something called precession, which I’ll have to save for a future post.)

I am amazed every year at the vast seasonal difference in the bearing of the sunset in Salt Lake. From messing with the calculators at http://aa.usno.navy.mil/data/ it seems that at the summer solstice the sunset is at an apparent bearing of 314 degrees, north of west over the Great Salt Lake; at the winter solstice it's bearing 239, well south into the Oquirrhs (which makes the apparent sunset even earlier...)

That's a huge 66 degree delta. It seems ridiculously large and I've never worked through the geometry to see how such a thing is possible (though I do note that 90 - 22.5 = 66.5; surely not coincidence?)

That's the seasonal sun variation I notice most (probably because I tend to be working or riding my bike at noon, not looking idly at the sun, whereas sunset is a rather slacker time in my day).

PS: I grew up in the Southern Hemisphere (South Africa, specifically) but have been a Utah resident going on 20 years now. I doubt that's what you're looking for, but there you have it.

Kevin, Evilmoose: hey I'll take what I can get- thanks for piping up!

Kevin: you hit on a great question- why is the angle-difference so much greater between summer & winter solstice suns at sunrise/sunset than at noon? The short answer is because the day is so much longer in the summer... but... I feel a follow-on post coming... (not tomorrow though- tomorrow's back to trees)

Kia Ora,
I'm from the Kiwi Country we don't do kangaroos however still southern hemisphere!!
great blog and keep up the good work.
Here we are at the antipodes
www.rasnz.org.nz
www.kiwispace.org.nz
www.marssociety.org.nz
:) good old org.nz
Dark skies!

Hi there! Chanced upon your website. I'm a Singaporean (nationality) of Chinese descent (ethnicity, there is no such thing as a ethnic Singaporean) living way down south, on the island state of Tasmania,an offshoot from continental Australia.