All About Moose Part 2: Subspecies and 3 Great Moose-Related Tangents

The second cool thing about Moose is that they vary regionally quite a bit, especially for a species so” young.” By young, I don’t mean necessarily how long they been existence, though Alces has only been around in the fossil record for around the last 2 million years. But more importantly, Moose went through a fairly recent population bottleneck, and as a result, the most common recent female ancestor of all Moose is thought to have lived only about 60,000 years ago (in Asia.)

Side note: Researchers figure this stuff out by looking at something called mitochondrial DNA, which is passed down generations in a straight mother-daughter line. This same type of research was behind the so-called “African Eve” or most common recent female ancestor of all humans, who for comparison, is thought to have lived around 200,000 years ago (in Africa.)

Side note: There’s another great human biology analogy here. One of the clearest genetic differences between human and chimpanzees is the number of chromosomes. We have 46; they have 48, as do gorillas and orangutans. It appears that sometime in the last 5 million years, the two stubby chromosomes #2 and #3 in the chimpanzee fused and became the normal-sized human chromosome #2. 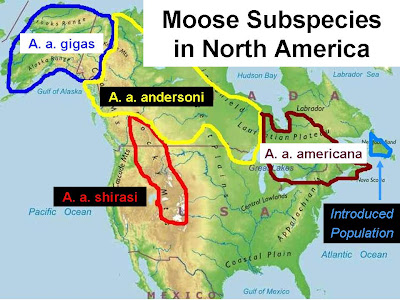 There are 8 recognized “subspecies” of Moose worldwide, 4 of them in . The subspecies here in (and throughout the American West) is the Shiras Moose, Alces alces shirasi. The Shiras Moose is the smallest of the North American Moose, and has a slightly lighter-colored coat. The smaller size seems an adaptation to the relatively mild (by Moose standards) woodland environment they stick to here in . In , by contrast, the Gigas Moose, Alces alces gigas, is substantially larger, a trait that serves herbivores well in cold environments with large open spaces (conservation of heat, defense against predators, don’t have to worry as much about getting hung up in brush/trees.) 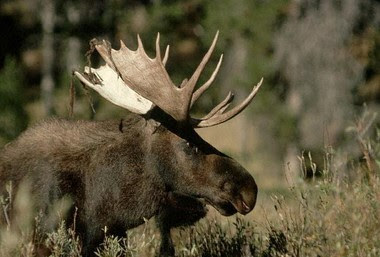 Mating behavior also varies among subspecies. The male Shiras Moose (pic left) is a serial monogamist, dueling for, courting and mating one female at a time. 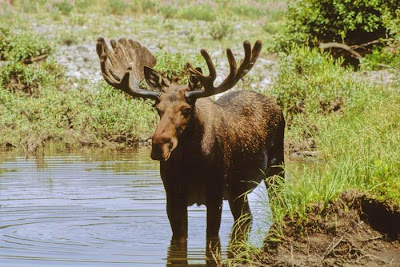 The male Gigas Moose (pic right) on the other hand is a harem-keeper, keeping a small herd of females and fighting off other males. In general, harem-keeping behavior among large herbivores is more common in open/plains environments, possibly because it’s easier to round up, keep track of and “defend” a herd of females in the open than in a forest. And the Gigas Moose is more social in general. Alone among the 4 North American subspecies, it seems to have developed some semblance of “herd” behavior.

The Shiras Moose on the other hand is almost always encountered solo- the only time I’ve seen more than one moose at a time in is a mother with a calf.

Tangent #1- The Moose Twins of 2007: This brings up something interesting from last summer. One of the things that’s always been a head-scratcher for me when spotting Moose is: is this the same Moose I saw last time I biked/hiked here, or is it a new one? Last summer I and several of my biking buddies encountered a mother Moose with twin calves multiple times. We saw this trio so often in the same area that we were able to get a good feel for its range, and since probably half my sightings last year were of the trio, it tells me I’m seeing the same Moose more often than not. 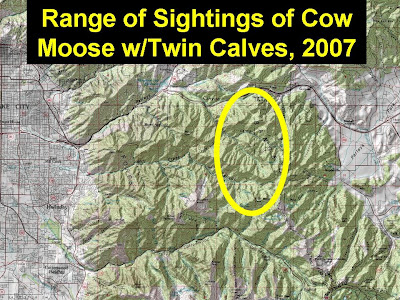 Tangent #2- Getting Chased By Moose: So I’ve only been chased once by a moose on my bike, in 2006, and I think it was more by accident than anything else. I was climbing the (very steep) Lamb’s Canyon Trail, and I encountered a bull Moose early on. I called and made a little noise, and he walked a bit off the trail. I passed, and about 5 minutes later I heard a clomp-clomp closing rapidly behind me. I looked back and there he was, probably 30 feet back and closing. Not charging, but moving at a decent clip. I was climbing steeply, slowly and had nowhere to go- a stream on one side and a steep embankment on the other. So I started yelling and waving one arm around like crazy, getting ready to abandon the bike and jump down into the stream bed. Fortunately the bull stopped and turned off the trail. 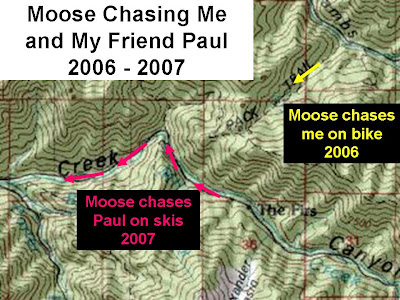 But the following Winter my friend Paul was chased for real. He was skate-skiing up (The road is closed to traffc and turned into a groomed ski trail in the Winter) and encountered a bull standing in the road/trail. Figuring he’d gone far enough anyway he turned back and started skiing down-canyon. He turned to see the bull trotting after him so he skied faster and ahead, but every time he stopped for a moment there came the bull trotting around the corner, and it chased him in this fashion almost back to the trailhead.

Tangent #3- I Can Smell Moose: So I’ve noticed a number of times after a close-Moose-encounter that there’s a particular animal smell in the air. And a couple year back I noticed the smell before sighting a Moose, and then saw a Moose just a moment or so later. This has happened several times since, and what’s interesting is that I can actually (I swear I am not making this up) smell the difference between Moose, Elk and Deer. It’s probably impossible to describe the 3 different smells, but here goes:

Smell is a weird sense. It seems like it can sometime trigger an instant recognition or a super-clear memory faster than anything else. But that goes beyond moose, and may be the topic for a future post.

No posting for a few days. Wife and I head to Mendocino tomorrow for 5 days for our 10th anniversary. Should be a great trip, with a whole lot of interesting and different trees, but doubt I’ll have time to blog.

Tangent: This is the first of 3 trips to California this summer: 1st this one (very fun), then less than a week later I’ll go to San Diego for a week for my company’s annual user conference (not fun), and then again in August, we (whole family) will go to Tahoe for a week (very fun.)

Final note: We're finally in Stage 4 of the morning birdsong cycle. I woke this morning to complete silence at 4:45AM. At 4:54 one anemic-sounding robin started half-assedly chirping...

Final FINAL note: Most of the great Moose info I dug up for these last 2 posts was generated by Kris Hundertmark of the University of Alaska, Fairbanks, who has been good enough to make copies of his research available online. Thanks Kris!

On opening day of deer season in Idaho this year, upon returning to my car after hunting the afternoon near an artificial deer scrape, as I rounded the bend and saw my car, a cow moose walked in front of it. I picked up the pace to try to see her down in the creek bottom. When I got closer on the road overlooking the creek there to my ecstatic surprise were two cow moose and behind them was a fully antlered bull! They were following the creek away from my car as I was on the road parallel to the creek heading to my car. I don't know if that would be classified as a harem but the trio being just below me less than 20 yards was like being at the San Diego Wild animal park without the fence. Typical for me, as I was unloading my 30.06 behind my car a deer up in thick woods snorted at me. For me this was an experience of a lifetime. Next year I will apply for a moose tag.