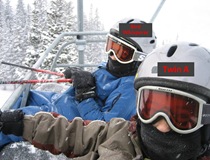 So this past weekend, while Awesome Wife and Twin B were away for their mother-daughter weekend, Bird Whisperer, Twin A and I went skiing up at Brighton. The first ski day with the kids each year is always a bit of a challenge, particularly in foul weather. There’s inevitably a “dialing-in” process of dinking around with balaclavas, mittens, boots, hand & toe warmers that ups the hassle-factor significantly, combined with necessary encouragement and prodding that quickly exhausts my fair-to-middling repertoire of parenting skills. Nonetheless, we had a good time. In a couple more weeks the kids will start lessons, which means either a) Awesome Wife and I will take them up and then ski together during their lessons, or b) Awesome Wife will stay home and I’ll take them for their lessons, during which time I’ll ski solo.

Skiing solo is OK, but sometimes after a while you can get burned out talking to strangers on the lift. A typical conversation goes like this.

Other Skier: I’m from Dallas. Where are you from?

Other Skier: Oh, you live here in Utah?

Other Skier: So are you a Mormon?

Tangent: This “Are you a Mormon?” thing also happens frequently when I travel out-of-state, and I always get a kick out of it- especially because I often get the question while I’m drinking coffee, or even a beer. The question never ceases to amaze me. When you meet someone from New York, or Houston, or San Francisco, you don’t immediately ask them if they’re Jewish, Baptist or gay. But somehow it’s OK to ask a Utahn you just met, whose first name you don’t even know, what their religious affiliation is. I sometimes wonder exactly how “Un-Mormon” I’d have to appear to not get this question. If I wore a yarmulke, would that do it? How about if my nose were pierced? What if I were sitting naked in the desert, smoking a joint? Would I still get asked then?

Clarification: I don’t smoke pot, and I don’t sit around outside naked. But if I did do those things- especially at the same time- the desert would be a cool place to do them.

So sometimes I just prefer to tune out on the lift and avoid chit-chat. And when I do, I often find myself passing the time by identifying PLTs. 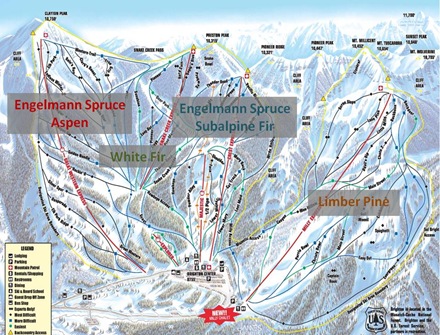 The PLT seasons for me are summer and winter. In the summer I’m up high biking and hiking all the time. In the Fall I’m driven down to the foothills by snow and mud, but when Winter finally sets in I return to the high country to ski, and I’m back in the PLTs again. Come Spring (aka Mud Season) I’ll be driven down low again until late May/early June, when the PLT cycle starts anew.

So the first ski day of the year is always a nice reaquaintance for me with Wasatch PLTs. Brighton Ski Resort, which ranges between 8,300 and 10,000 feet, is dominated by 3 PLTs: Engelmann Spruce, Subalpine Fir, and Limber Pine. (I posted about each this summer, and you can follow the links if you want background on any/all.) 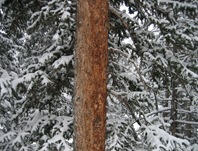 Engelmann Spruce is the most common, so if you see a PLT at Brighton and have no idea what it is, chances are it’s a Engelmann Spruce. There are 3 easy ways to ID them from a distance, and 1 easy way close up. From a distance, the first way is bark (pic left); if it’s orangey-brown color, it’s an Engelmann Spruce. Second is cones. Firs don’t bear any cones in the Winter, but Spruce still do, particularly in the upper branches, which you can get a good look at from the lift.

Tangent- Cones: The biggest surprise for me Sunday was all the cones still up in the high branches. All over the place at Brighton, the Spruces are loaded with cones. What gives? Don’t they have any Red Squirrels up at Brighton? If I were a T. hudsonicus, I would get my butt up Big Cottonwood Canyon. At 2500 calories of seeds per cone, at least 200 cones per tree, and tens of thousands of cone-loaded Spruce, there’s probably enough food up there to tide 4,000 Red Squirrels through the Winter. 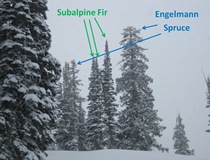 And third, the Spruce look “fatter” or at least “fuller” in profile than the Subalpine Fir, which are really thin. Engelmann Spruce is a climax species in these parts. It doesn’t do well as a sapling in direct sunlight, and typically grows up in the shade of more sun-tolerant pioneers, such as Limber Pine or Aspen, or even Subalpine, White or Douglas Fir. But once it attains full height, it shades out these other species and comes to dominate large stretches of PLT forest. In the absence of natural disturbances, such as fires or avalanches, this dominance is broken less often, and so since Euromerican* settlement Engelmann Spruce has come to dominate even more thoroughly in large stretches of the Rockies.

*”Euromerican”. Like that? I just made it up now. I’m going to trademark it, like I should have done with “Utard” back in the 90’s. Yes, I’m the guy who invented the word “Utard.”

The close-up way to tell Spruce-any Spruce – from (any) Fir is to pluck a needle. If you can roll it between your thumb and forefinger, it’s square in cross-section and therefore Spruce. Firs and Douglas Firs have flat needles that can’t be rolled.

The most common associate of Engelmann Spruce is Subalpine Fir. And even though Subalpine Fir isn’t anywhere near as shade-tolerant or long-lived as Engelmann Spruce, it has one good competitive trick: it grows fast. And so it often capitalizes on any disturbed open spots before Spruce can effectively react, and so persists alongside it.

There are 2 kinds of Firs in the Wasatch. Most of those you’ll see from the lifts at Brighton are Subalpine, tall, skinny and spire-like. But I’ve come across White Fir here as well, while tree-skiing down lower in some of the relatively sheltered draws served by the Snake Creek lift. It can be tough to tell the 2 Firs apart. As a rule, if it’s alongside a bunch of Spruce, it’s probably Subalpine; if it’s alongside Douglas Fir, it’s more often White Fir.

Speaking of which, I don’t recall ever skiing past a Douglas Fir at Brighton, and generally they don’t seem common much above 8,500 feet in the Wasatch.

The bark of Subalpine Fir (pic right) lacks the orangey-reddish tones of Engelmann Spruce bark, and it’s often smoother, less patchy/peeling looking. When young the bark is pretty smooth, and gets more furrowed with age.

The 3rd PLT isn’t technically a PLT, because it isn’t just Piney-Looking, it actually is a Pine, Limber Pine. Limber Pine is of course interesting because it’s the exception to the no-pines-in-the-Wasatch rule. 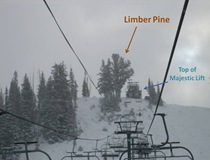 It’s real easy to pick out close-up because it’s the only conifer the Wasatch with needles bundled in groups of 5. It’s also easy to pick out at a distance from the lift; its profile is distinctly “bushy”, “spreading”, and clearly un-spire-like compared to the surrounding Firs and Spruces. Limber Pines do lousy in the shade and prefer open sunlight. They seem to be very effective at seeding on and around rocky, exposed outcrops and ridgelines. Here at Brighton they’re all over the place under the North-facing open slopes served by the Millicent lift, and there are also a couple of isolated ones at the top of Majestic lift (pic right.)

Limber Pines have a neat co-evolutionary history with corvids and appear to have a fascinating kinship story with Southwestern White Pine in Arizona and Mexican White Pine down in (wait for it…) Mexico. I did a post on the whole Limber Pine-Corvid/White Pine Complex deal back in August (which is a totally cool story) that you can check out here if you’re interested. This book on my Suggested Holiday Gift List last week provided much of the source material for that post and makes a great read for anyone who really wants to understand the relationships between birds and pines.

Now wasn’t that more interesting than shooting the breeze with some tourist about his vacation? Man, I am telling you, when you’re dialed into trees, there’s always something cool going on!

Maybe you should try smoking pot naked on the chairlift? I doubt anyone would even get to the question of religion. I would perhaps wait until spring for further investigation. We wouldnt want to have to call the fire department to get you off... ;)

I have to admit, Mormon is what I think of anytime someone says there from Utah. I guess I'm just polite enough not to say anything out loud. Honestly, I don't think a lot of people think about being Mormon in terms of religion (even though that's clearly what it is), so I guess they think it's okay to ask about it, even though they wouldn't ask other questions about religion. It probably gets old, though.It is probably best just to look at the trees.

Strangely enough, the only people from Utah I currently "know" (meaning read their blogs, I haven't encountered anyone in person from Utah lately) are you, Elden and Jill up in Alaska, and I don't think any of you are Mormon.

I guess I'm lucky no one has any associations like that with Michigan (that I know of), although the town where I grew up had a huge prison and that's all anyone would ever mention when I told them where I was from.

Note to self. Proofread comments before submitting. That should be "they're from Utah ... "

I must disagree. Being from SF, one of the first questions I always get is "Are you Gay?" usually followed by "How can you stand all the earthquakes?"

And it never stops being funny either

I see how you made your calculation and it makes sense. But, do you see why my intuition says that there's something wrong?

Hi KB- boy that *does* sounds like a lot! It’s been a few months- I originally came up with those figures for this post back in October- but I think (not sure) the book I got those figures from was "Autumn”, by Peter Marchand. I got the book from the SLC library and have long since returned it, but I’ll see if I can look it up again next time I’m down there. (It’s also on google books, but the relevant pages aren’t included in the preview…)

Anyway, thanks for calling it to my attention. I do make my share of mistakes in this project (check out last year's posts on moss, Heart-leaf Arnica, & Dyers Woad) and am always happy to be corrected!