The Big Tree In My Front Yard

If I spent the Spring and Summer watching the world wake up, I’ve spent the Fall watching the world go to sleep. Starting up high with the Aspens and Maples, I’ve followed the changing leaves down into the foothills with the changing scrub oak, and then eventually down onto the valley floor. As I’ve watched Stage 2 Fall I’ve paid close attention to any lingering spots of greenery in my yard, neighborhood, office park, my kids’ school. After a season paying so much attention to green, growing things, seeing those last bits of green go leaves me with a little twang of sadness. OK, a big twang. I’ve watched, understood, and gotten into this past living year more than any other and I’m still not ready to let go of it.

Tangent: I re-wrote that last sentence 3 times and I still don’t like it. The first time I used “enjoyed” instead of “gotten into”, but “enjoy” sounds too weak, like maybe something a senior citizen would say about their lunch. The second time I used “connected with”, but that sounds way too hocus-pocus new-agey. The third time I used “loved” but that came off way too melodramatic, like a hospital scene in a Spanish soap opera… 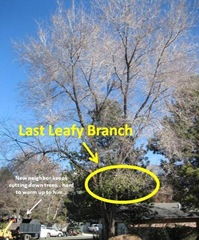 Last week the leafy green holdouts in my day-to-day world were reduced to just one final limb on one tree, and this past weekend’s storm winds finally tore the last few, still-green leaves from it. It’s this tree I’m going to blog about today. It’s fitting because it’s a tree I’ve been meaning to blog about for some time now- the tree in my front yard.

If you stumbled on this blog and didn’t know me, you’d think I was obsessed with trees, and I guess you’d be right. But what you probably don’t know is that I had almost zero interest in, or knowledge of, trees until about 3 or 4 years ago. At first it was just piñons that interested me, and after a year or so of poking around and learning a bit about them (Thanks, Ron Lanner) my interest expanded to other conifers. A little over a year ago my interest expanded into Oaks (Thanks, Professor Chuck) and from there into leafy trees, flowering plants and angiosperms of all kinds. Taking on this blog project kicked my interest into high gear and this past year has been almost like a veil being lifted from in front of my eyes- suddenly, in my mid-forties, I’m finally seeing the world around me.

And remarkably (or embarrassingly, really) until this Spring/Summer, I paid absolutely no attention- zip, zero, nada- to planted suburban trees. I’ve never been interested in yard-work or gardening, and planted trees lining city streets and office parks seemed like just some big, lame, phony garden.

But gradually, the planted trees, the trees of the Temperate Suburban Woodland (TSW), started catching my eye, and over the summer I found myself- more and more often- pulling over the car or the road bike and plucking a couple leaves to identify later at home, and as I did so, started to learn about these TSW trees and their stories.

I moved into my current home over 6 years ago, long before I bothered to look at trees- any trees- twice. Over those six years I’ve walked, run, pedaled or driven in and out of the driveway thousands of times, and every one of those times I’ve passed the same tree, the biggest tree in our front yard. 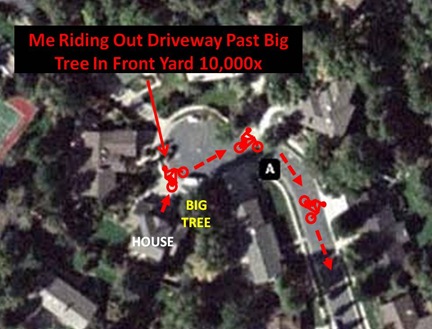 Finally, one day this past August I thought, Hey, I write a tree-blog, and I don’t even know what the biggest tree in my own front yard is… so I walked out front with my trusty tree guide and in about 60 seconds I knew what it was. And when I knew, I immediately felt surprise, nostalgia, and just a little bit of chagrin, all at the same time.

I don’t come from a “Tree Family”; though I was blessed with a wonderful family growing up, I’m really the only member of my childhood-nuclear-family who turned out at all outdoorsy. 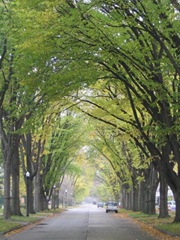 And in fact I have exactly one and only one memory of a parent ever talking to me about a tree as a child. My mother and I were walking down Main Street in my hometown when I was probably 7 or 8, and she told me about Elms and Dutch Elm disease. She told me that our town, and countless other towns all over America, used to be shaded by huge, beautiful trees called Elms, and that in the years before I was born, as she was growing up, they had all been killed by an awful disease that came from far away. Even then, the tale of thousands of trees dying seemed frightening and terrible, and the story stuck with me. For decades, one of the few things I knew about trees- any tree- was that Dutch Elm disease wiped out all the Elms. And yet here, in front of my very house, where I’ve passed more than 10,000 times, is a tall, healthy Ulmus americana, the American Elm.

Next Up: All About Elms, Beetles and Fungus

PS- Tangent: I can’t believe there’s actually a Wikipedia entry on my hometown. There’s even a list of famous people who lived there. I only knew one of them, this guy, who seemed like he was always pissed off at me and my childhood friend David Galante for making too much noise, or riding our bikes in middle of the street, or ringing his doorbell and ditching, or throwing apples at his house, or writing stuff on his car... Huh. I just figured out why he was always pissed off at us…

How about "appreciated," as in not just enjoyed but also (def.1a in my book) "to grasp the nature, worth, quality, or significance of." Or maybe 1c: "to judge with heightened perception or understanding."

SLW- Oo..."appreciate" would be a great word choice... that is, pretty much anywhere except here. "Appreciate" is way, way over-used here in Utah in a way like no place else. It's hard to explain, but people here are always saying "Appreciate you!" (more accurately pronounced, "PREESH-ee-ate-chuh!")as a synonym for "thank you" that it's almost a joke here.

Utah readers will totally get this, but it's hard to convey to out-of-staters. Kind of like fry sauce.

P.S. OK this is weird- the google type-in "word verification" to post this comment is "sally." Too freaky...