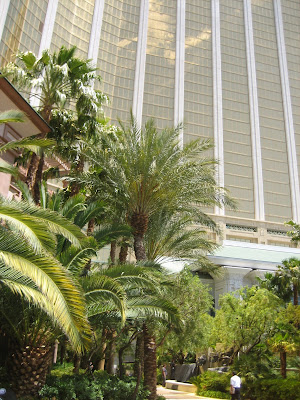 The most common, easily recognizable trees in Las Vegas are palm trees. They’ve been planted everywhere, very un-naturally, and though they’re gaudy, ostentatious and complete water-hogs, they’re really interesting trees, because- among other reasons- they’re monocots.

Tangent: I grew up far, far from palm trees. I don’t think I ever saw a palm tree growing outdoors until I was 19 and went to for college spring break. Since then of course I’ve seen lots of palm trees, usually either on vacation or while traveling for work to places like or . 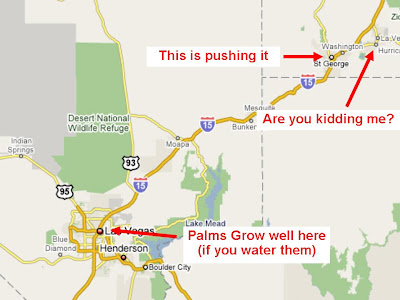 So when I moved to , one of the things that seemed really cool was that I actually lived in a place where I could drive to Palm trees. is only a 6 or 7 hour drive away, and it’s almost been carpeted with palms. And there are palms closer- , and a fair number in St. George. Of course, palms don’t grow anywhere near St. George naturally, but there’s almost a weird civic-botanical pride in these borderline-warm-desert communities, as if they’re determined to show off their “tropical-ness”. Like, “Hey, look at us, we’re like !” Only of course they’re not. St. George gets at least a dozen-plus below-freezing nights per winter, and usually gets a dusting or two of snow each year as well. For palms to survive in St. George they require special care and attention, and they never seem to do particularly well there; they’re neither plentiful nor especially tall. Over the last decade, this trend seems to be continuing- almost ridiculously- up and out to Hurricane, about 20 miles Northeast and 1,000 feet above St. George. Hurricane is mild, but it has a real winter- leaves drop, come December the place is brown and cold, and freezing nights and quick-melting snowshowers aren’t at all unusual. But as you drive along Highway 9 into town from St. George, there they are- diminutive, stressed-out, recently planted palms in front of the newly-constructed hotels lining the road.

Earlier when I described angiosperms as being divided into monocots and dicots, I made the classification seem real clear and simple. Actually, it looks like this: 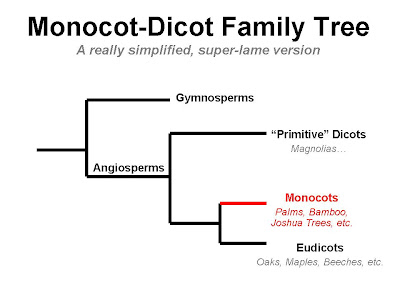 Angiosperms can be divided broadly into “Primitive dicots” and a second group which includes all monocots and a bunch of other dicots, which- somewhat counterintuitively- are more closely related to the monocots than they are to the “primitive dicots”, and apparently share a common ancestor with monocots. These “closer-to-monocot” dicots” are called eudicots.

The best example of a “primitive dicot” most of us are familiar with is the magnolia. Eudicots, on the other hand, include nearly all the temperate leafy trees we’re most familiar with- oaks, maples, beeches, cottonwoods, aspens, willows, etc. 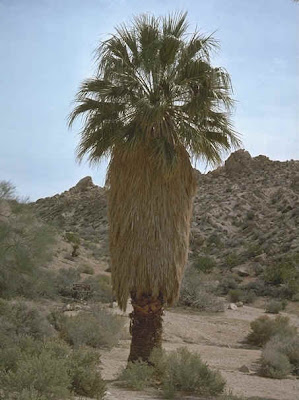 I’ve described 2 monocots previously- grasses and lilies. But there are also monocot trees, of which palms are a spectacular, and very successful example. There are over 2,600 species of palm in the world, in over 200 genera. But in the desert southwest, only 1 species is native- the Desert Fan Palm, Washingtonia filifera. It grows typically in isolated desert oases in the southwest, in places like and Joshua tree national monument. They’re also commonly planted in desert cities and suburbs, and if you’ve ever driven around or or , you’ve seen plenty. 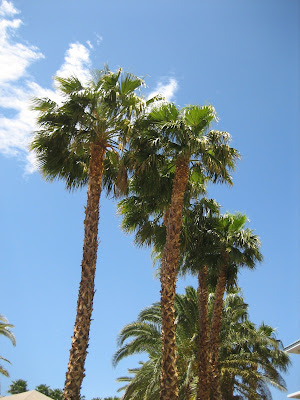 But they typically look different in the cities than in their native groves and the reason is pruning. In their natural setting, As Fan Palms grow new leaves/fans/stalks, the older fan-stalks die but remain hanging from the tree, almost like an old brown skirt. But in office parks and hotels and yards, the older fan-stalks are typically pruned every year or so. The pruning makes the palms appear “cleaner” and more elegant I suppose, but after you’ve visited a natural palm grove or two, the pruned palms look a bit strange, almost naked. Oddly, your best opportunity to see “natural”-looking fan palms without hiking to some desert oasis is often to take a drive through one of the lower-rent areas of South Phoenix or East Los Angeles, which residents often don’t seem to be as diligent in having their fan-palms pruned.

It’s thought that monocots diverged from eudicots via a shrubby or brushy, non-woody, non-tree ancestor, and the reason is this: the structure of the wood of monocot trees is highly variable, and in all cases, completely and utterly different from the standard wood architecture common to all dicots and all conifers and which we looked at way back when we talked about Junipers in the Newfoundland Mountains. 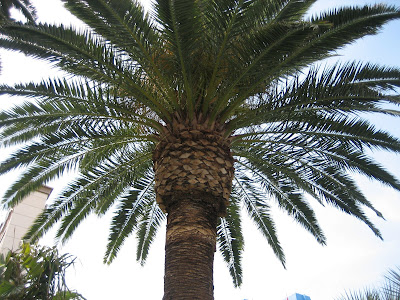 And it is this feature, above all else, that makes monocot trees so darn interesting. Their structure, form and architecture is so wildly different from “normal” trees, and as Colin Tudge (on of my favorite tree authors) has written, they represent a fundamentally different way of being a tree. Or, to phrase it a little differently, you spend all your life around trees, you think you know them, and then when you try to understand palm trees, you realize you don’t understand them at all. Because monocot trees have effectively re-invented wood. And not just once, but multiple times, for the structure of palm wood is completely different from the structure of bamboo wood which is in turn completely different from the structure of Joshua tree wood. Each order of monocot trees is a little alternate tree universe, showing us how wood could have turned out, and each showing a different evolutionary path to achieving the same goal.

Tangent: This same logic- a common wood architecture, strongly suggest a common, woody, ancestry between all conifers and angiosperms. For though there are significant structural differences between the wood of conifers and dicots (the xylem tubes for example, are very different) the overall architecture is very similar.

The structure of palm wood is completely alien to the standard conifer/dicot architecture. Most importantly, the xylem and phloem occur in long continuous-but-widely-separated discrete strands throughout the truck. There’s no continuous cylinder of cambium encircling the trunk. And because there’s no continuous cylinder of cambium, there’s no secondary thickening. Meaning if you compare a young oak or pine to an old oak or pine, the young tree is skinny, and old one thick. But by and large, young palms are about at thick as old palms, only shorter, which is why young palms lining hotel parking lots look so stout and old tall palms often look super-skinny. 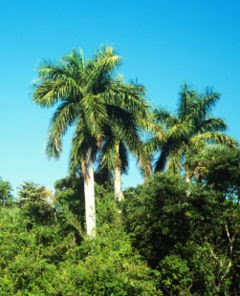 Palm leaf-stalks almost always take one of two shapes- a fan, like the Desert Fan Palm, or a long feathery stalk, a good example of which is the Royal Palm, (Genus = Roystonea, several different species) native to Florida and the Caribbean, and frequently planted in desert Southwest cities. The leaf-stalks all emanate from the top of the tree, from the apical bud (which we talked about when we looked at grass, only a palm’s apical bud is way, way above-ground) and if the apical bud is brunt, damaged, diseased or cut out, the palm usually dies. There’s no branching on a palm. 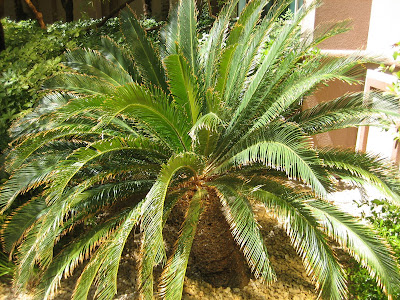 Tangent: The plant that is not a palm but is most often mistaken for a palm is a cycad. A cycad (pictured right) has an externally similar form, but got there via a completely different evolutionary path. In fact, cycads aren’t even angiosperms- they’re gymnosperms, and don’t produce flowers (or cones for that matter- they’re not conifers either), but reproduced through organs called strobili. Individual cycads are dioecious (always male or female) and have been around for a very long time- around 270 million years. There are only about 130 species in the world today, but they used to be far more numerous. Long before angiosperms or even conifers were around, forests of giants cycads covered much of the planet. The gasoline that powers your car probably came ultimately from prehistoric cycads.

The sheer different-ness of palms is what makes them so fascinating to me. But wonderful as they are, they’re not my favorite monocot tree. But before we get to that, you can’t spend a week in the Mojave without noticing its signature shrub- creosote. 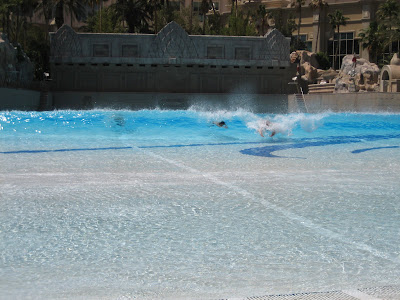 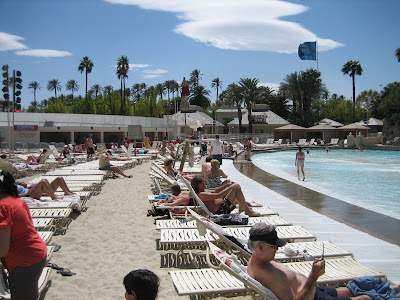 Tangent: The weirdest thing about is staying in the ultra-artificial environment of a a strip casino/hotel, and then zipping out into the desert every morning to check out shrubs and wildflowers and Joshua trees. Here are a couple pics of the artificial beach and wave pool at my hotel, which was pretty weird, but the grounds of the hotel were a wonderful place to check out palms and cycads. 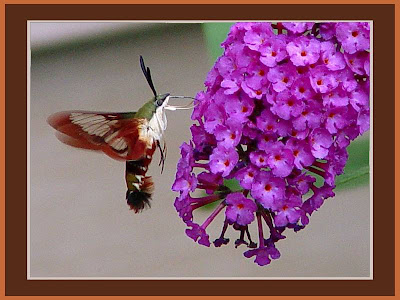 Coolest thing I saw in Vegas but did not get a picture of...

No, it wasn't a woman flashing her boobs- it was this: a Hummingbird Moth (Family =Sphingidae, hundreds of species.) If you’ve never seen one, it’ll freak you out the first time. It looks like some weird exoskeletal version of a Hummingbird. Which is of course exactly what it is. The fly and sound eerily similarly to hummingbirds, but wrong somehow, as they flit from blossom to blossom collecting nectar, just like a hummingbird. I saw one as dusk at on the strip as I was stopped at a light with my car window open. The Hummingbird Moth was visiting the honeysuckle blossoms in the median. (The Strip has wonderful medians!) It’s worth mentioning, not only because they’re so cool, but it’s another great example of convergent evolution. Like dicot and monocot trees, Hummingbirds and Hummingbird Moths are two completely alien, wholly differently derived ways of achieving a very similar end product.

Nice post; good story!! One of my "things" is cycads, but right now I only have a couple of Zamias. I can't grow C. revoluta (the one in your picture), too dry I guess.

Obviously, when I read this two years ago (huh?, I did?), all I saw was the cycad.

As I keep saying about your posts, "I didn't know that about..." palms. And I went to grad school in Arizona! You are just a GREAT blogger, dude...

Forgot to add-- I'm so glad you're linking to all these old posts.