3 P's of the Paunsaugunt Plateau- Part 2: Bristlecone Pines Are Super-Old 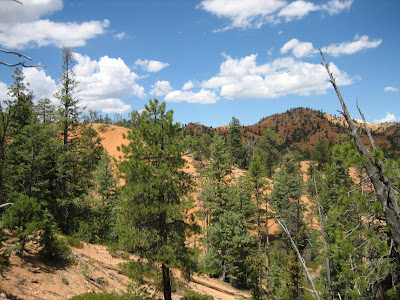 The second “P” is Pines. The Paunsaugunt Plateau is covered with a beautiful dense coniferous forest. The composition of the forest varies depending on elevation and aspect, but unlike the Wasatch, Pines are continuous throughout, including Ponderosa, Limber Pine, Colorado Pinon and Bristlecone Pine. 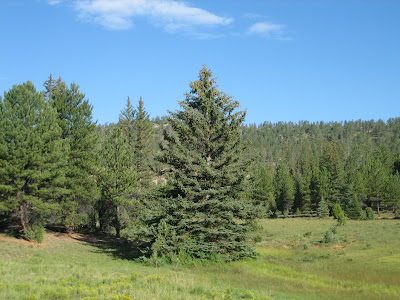 There’s also plenty of Douglas Fir and Blue Spruce. Blue Spruce is all over the place ringing the meadows and watercourses, including by our campsite (pic right), and in fact there were so many that I may be forced to eat my words and go back from 1% to 5% as the best guesstimate of how many Utah Spruce are pungens vs. engelmanii…

Tangent: Isn't it kind of awesome and ironic how, after writing these whiny posts about how there are hardly any pines or Blue Spruce in the Wasatch, I go to this other place in Utah that's like inundated with both of them? How cool is that??

Can A Tree Be Happy? 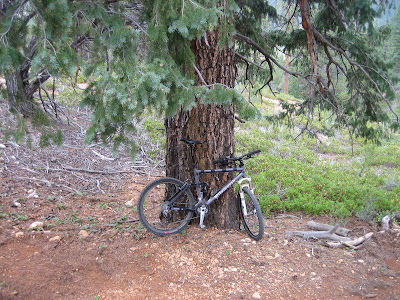 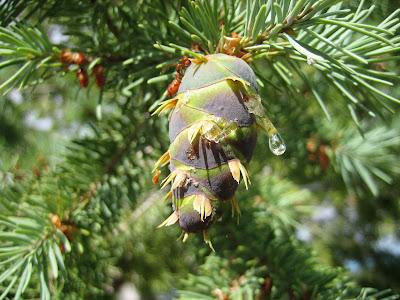 And I couldn’t help notice how robust, healthy, and just, well… happy(!) the Douglas Fir looked down there, compared to the dry, dark somber Pseudotsuga up here in the Wasatch. (Pic left = trunk with bike for scale. Pic right = immature cone.)

Of the 4 Paunsaugunt pines, perhaps the most interesting, and the only one we haven’t previously talked about, is the Great Basin Bristlecone Pine, Pinus longaeva. 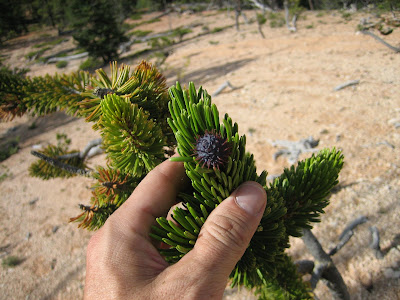 There are actually 3 species of Bristlecone. The one we get here in Utah and clear across Nevada is P. longaeva. Rocky Mountain Bristlecone Pine, P. aristata looks really similar and occurs in Colorado, Arizona and New Mexico, and Foxtail Pine, P. balfouriana (which does look a bit different) is endemic to California. Bristlecones are hard pines, and so are more closely related to Ponderosa or Red Pine than to Pinon or Limber Pine. Like Limber Pine though, Bristlecones are 5-needled, so there are actually2 different 5-needled Pines growing on the Paunsagunt. They’re easy to tell apart though: Bristlecone needles are shorter and the fascicles placed more closely along the twig, giving the twigs a distinctive “bottle brush” look. (pic right = needles in hand.) 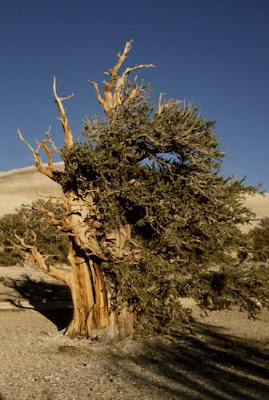 The one superlative almost everyone knows about Bristlecones is that they’re old. They live up to nearly 5,000 years, making them the oldest living standalone trees. The classic Bristlecone is an ancient gnarled, windswept, half-dead lonester, hanging on for dear life on some rocky, high-altitude ridgeline.(sample pic left) 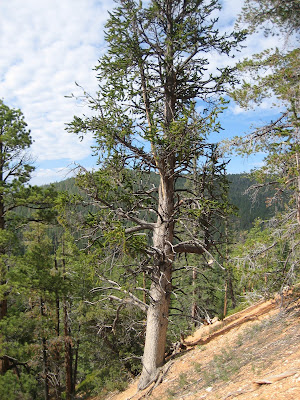 But the Bristlecones of the Paunsaugunt are unique in 3 respects. First, they cover an area of land larger than any other stretch of Bristlecones anywhere. Second, they grow much healthier, straighter and taller (pic right) than the typical gnarled Bristelcones growing on most high mountain ranges. This is because they grow under far more hospitable conditions- warmer temps, lighter winds, more rainfall, better soil. 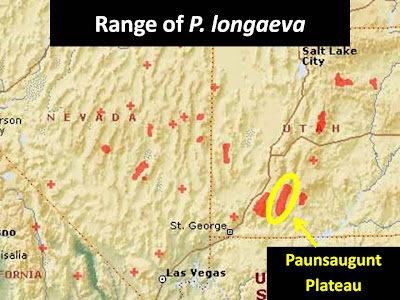 But these same hospitable conditions are the cause of the third unusual characteristic of Bristlecones on the Paunsagunt: their short life span. Bristlecones here live nowhere near 5,000 years- 1,500 is about the max. The same warmer, wetter environment that helps them to grow tall and straight also enable 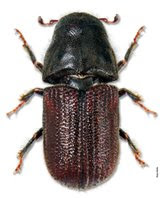 Bark Beetles, or Mountain Pine Beetles, Dendroctonus ponderosae, (pic right) to thrive, and these guys are the eventual demise of many, many pines. The Paunsaugunt is also far more vulnerable to fire than a typical high-altitude ridgeline, and even if fires are rare, over the course of a millennium, probability works against you.

Tangent: I once read the great (but probably bogus) stat that if humans never got old or sick, the average human lifespan would only be about 600 years; that’s the amount of time it would take people, on average, to get killed in a car wreck or plane crash or flood or get struck by lightning or crash fatally while riding a bike with a turtle. Presumably that amount of time would go up if people wore helmets and stayed at home all the time. In a way, the Bristlecones in Paunsagunt are living a high-quality but high-risk lifestyle compared to their mountaintop brethren, and in the long-term that higher level of risk catches up with them. 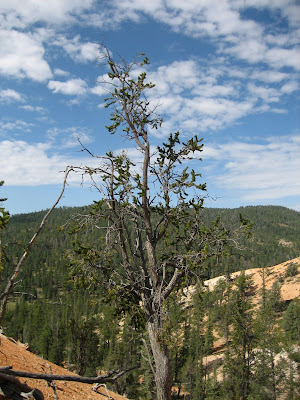 The last culprit in the shortened life spans of Paunsaugunt Bristlecones is that remarkable soft red limestone, which underlies the entire plateau and erodes into all of those spectacular breaks and hoodoos. When a tree stands for over a thousand years on that stuff it runs a pretty good chance of seeing its root-base undercut, and come crashing down to an early death.

And speaking of that soft red limestone, there’s something else interesting about it that we’ll look at tomorrow when we check out our final “P”.