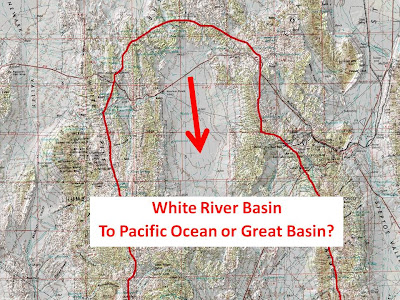 From Ely we continued West on US50 up over Robinson and come down into Jakes Valley, a non-descript, sage-filled, Central Nevada valley. But here’s the weird thing about Jakes Valley- it’s not entirely clear that it’s part of the Great Basin. It drains South via Jakes Wash into the White River Valley, where it links up with (yes that’s right) the White River. The White runs due South through Hiko, Alamo and down to Lower Pahranagat Lake. South of the Lake, a Pahranagat Wash continues all the way down to the Muddy River, past Moapa (not far from my Mormon Mountains fiasco, back in May...) and Lake Mead. But Pahranagat Wash is permanently dry, so White River Valley is generally considered part of the Great Basin. But with just a titch more rainfall (and a bit less irrigation pull-down?) the White River Valley- and Jakeys with it- would be part of the Colorado drainage.

The White River is pretty much the only river in Southeastern Nevada and is home to 6 species of endemic fish. After Little Antelope Summit the highway drops into…

Another small drainage basin, roughly 20 miles across by 60 miles North-South. The road bends around the South end of the Diamond Mountain, crests Pinto Summit, and drops into…

Diamond Valley, 12 x 45 miles, is home to Eureka, the first town since Ely. An old mining town, Eureka is pleasantly free of the McDonald’s and Motel 6s that are starting to encircle Ely. It lies in the upper/Southern end of the valley, which drains North into an alkali flat. A dozen miles West of Eureka, US50 passes through “Devil’s Gate” and enters…

Is this a basin by itself, or does it link into Diamond or Monitor valleys? Can’t tell for sure. It’s small, and fairly unremarkable, tucked between the Monitor, Antelope, and (wonderfully named) Mountain Boy Ranges. Arrow-straight at this point, US 50 passes the North end of the Monitor Range and enters: 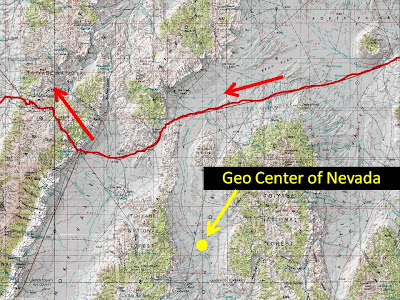 Monitor Valley, a long (10 x 70 miles) valley separating the Toquima and Monitor ranges, is notable for (at least) 2 things. First, just 13 miles South of the highway, in the middle of the valley,lies the exact geographic center of Nevada. That’s right- 10 basins and we’re only halfway across Nevada. 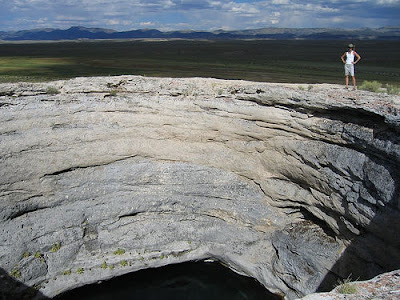 Second, it’s home to Diana’s Punch Bowl, an interesting geologic oddity that’s on my list of places-to-visit. Past Hickson Summit (and Hickison Petroglyph Site) we descended into Big Smoky Valley.

Tangent: Hickison Petroglyph site is a great example of the bad and good aspect of Central Nevada. Like so many Nevada spots, it’s interesting, pleasant, and worth a stop- if you’re passing by. But it’s not worth a 6 or 7 hour drive just to come see it. That’s bad because it makes it unlikely that you’ll visit the spot, but good because if you do, you’ll have it to yourself. And that’s pretty much the deal with all of Central Nevada.

Big Smoky Valley has another good-if-you’re-passing-through spots: Spencer Hot Springs. Nice pool, free, good camping nearby, and an awesome view of the Toiyabes. 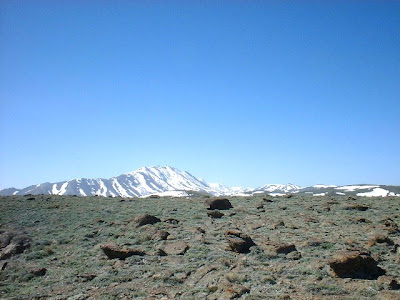 The Toiyabes are a spectacular range, some 120 miles long. With several 10K+ peaks, it rivals the Rubies and the Snakes as the crowning jewel of Nevada. But the forest cover of the Toiyabes is much sparser and scrappier than in either of its rivals ranges, and the reason is that it lies a couple hundred miles further West, deep in the rain-shadow of the Sierras.

The highway climbs over the very Northern end, and descends through Austin- first town since Eureka and last till Fallon before dropping into the Reese River Valley.

The Reese River (a creek, really) crawls North for nearly a hundred miles before joining the Humboldt River at Battle Mountain. The Humboldt is Nevada’s longest/biggest River, 300 miles long crossing almost the entire Northern half of the state. The Humboldt Basin is the largest drainage basin in Nevada, draining an area of nearly 17,000 square miles, or roughly 15% of all the land in Nevada. (For reference, the GSL Basin drains about 21,000 square miles.)

Nearly our entire trip home from Tahoe, at the end of this week, will be in this basin, as we take the fast-but-boring route home along I-80 (like normal people.)

We cross into this one at New Pass Summit. It’s another small basin, maybe a dozen miles across, by 30 miles long. But here’s the thing about Edwards Creek Valley. As you drive down it, look to the Left/Southeast. The range you’re looking at is the Desatoya range. And this is the last appealing range until the Sierras. Cranking your head to the left at 75mph, you see a high, green, partially forested range- the last such sight for a couple of hundred miles. 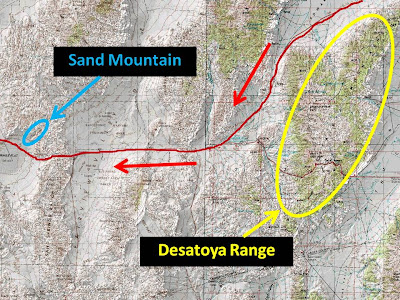 We’re now deep in the Sierra rain shadow, and at the same time, we’re going down. Where the Basin ranged from 6,000 to 8,000 feet on most of our drive between Ely and Austin, it now descends to 4,000 – 5,000 feet. After the Desatoyas, we won’t see another (non-planted) tree until the West side of Reno. Driving from here to Reno makes the stretch between Ely and Austin look positively green and lush in comparison.

The Desatoyas are just a hair under 10,000 feet high, and have extensive woodland of Pinon and Curlleaf Mountain Mahogany. The range has 11 perennial streams, 2 of which support native Lahontan Cutthroat Trout. In short, it sounds like a charming range, but not nearly as high or dramatic as the nearby Toiyabes. So bottom line: it probably rarely gets visited. But starting now, it’s on my list. I don’t know when, but I’m climbing Desatoya Peak.

Dry, low, this small basin is mostly owned by the US Navy. The navy does nuches of test/training flights ere, and bought the valley to minimize complaints from landowners. 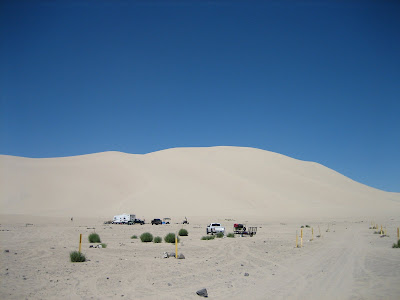 We enter this basin and immediately see Sand Mountain on our Right/North. Sand Mountain, a 600 foot high, 2 mile long sand dune, lies on the edge of ancient Lake Lahontan, and consists of windblown sands from the Walker River delta. Sand Mountain is cool for 2 things:

First, it is one of only 4 “Singing Sand Dunes” in North America, and one of only 35 worldwide. Singing sand dunes emit a booming or roaring sound of up to 100 decibels, triggered either by wind, or by someone walking near the crest of the dune. All singing sand dunes seem to have the following 3 characteristics in common: sand grains between 0.1mm and 0.5mm in diameter, the sand contains silica, and the sand is of a specific humidity. 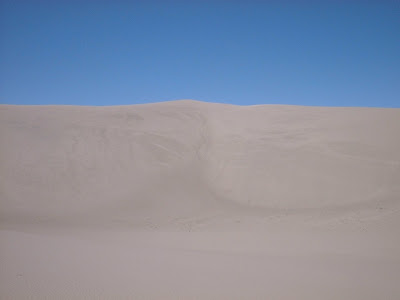 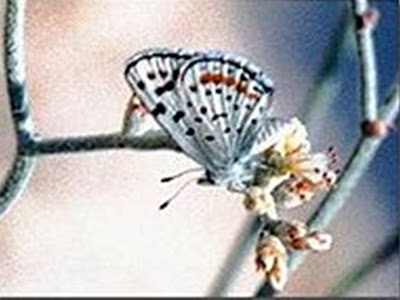 Second, this tiny little 2-mile long universe hosts an endemic- the Sand Mountain Blue Butterfly, Euphilotes pallescens arenamontana, which lives nowhere else in the world, except on and immediately around this singing dune.

This whole basin drains into the Carson River, which terminates in the Carson Sink, south of Carson City. Fallon, the largest town we passed through since leaving Salt Lake, sits in the Eastern end of this basin. ~30 some-odd miles later, we pass into the final basin of our journey, and the basin of our ultimate destination, the Truckee Basin.

Wow. 16 basins, each with its own mountains and mysteries, each worth a couple of weeks of exploration, all passed by in 2 quick days. But this last basin we’ll spend a week in. And it is utterly fantabulous, both hydrologically and botanically.