Hydrology Road Trip Part 2: Into the Heart of the Basin

We headed out like I do for most any road trip, South on I-15. We turned off at Nephi on Rte. 132, heading West. About 8 miles West of Nephi, we crossed through a low gap in the West Hills and entered- The Sevier Basin is another large basin, of comparable size to GSL, but oriented around a single, long, winding, never-very-impressive river, the Sevier. Though much more one-dimensional than GSL in this respect, it encompasses a wide array of terrain and landscape. It starts in the headwaters of the Paunsaugunt Plateau. That’s right- everything we talked about in the Paunsagunt series- the cool hoodoos, the Pronghorns, the Bristlecones, the super-rare endemic wildflowers- lies in the Sevier Basin.

Badger Creek, which ran 50 feet from our campsite, joins up with the East Fork of the Sevier River, which fills, then drains, Tropic Reservoir, then winds it’s way North to Anitmony, before it cuts West across the Sevier Plateau to join the Sevier River at Junction, UT.

Side Note: From our campsite, only about 3 or 4 miles due West, is the boundary of the Sevier Basin and the HGB itself. The top of the breaks in Bryce National Park is the dividing line between the Great Basin and the Pacific Ocean drainages. If you stand on one of the of overlooks at Bryce , turn East, and take a pee (not recommended), your pee will drain into the East Sevier, the Sevier, and eventually Sevier Lake. If you turn West and pee, your pee will drain down through the breaks into the Paria, then into the Colorado, through the Ganda Cayon into Lake Mead, down through Lake Havasu into Mexico and out into the Sea of Cortez. 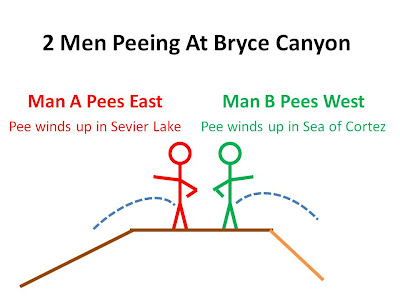 From Junction, the Sevier continues North, joining the path of I-70 just South of Richfield, following that Interstate until Salina, where it heads off due North to Gunnison.

At Gunnison it angles slightly Northwest, fills, then drains, the reservoir at Yuba State Park, then crosses its second Interstate, I-15. 15 miles later it hits Rte. 132- our route- and parallels it clear to Delta. Past Delta it loosely follows US 50 for a final 40 miles or so, before ending in Sevier Lake.

Sevier Lake is ephemeral, usually more of a playa/mud flat than a lake. It shimmers off in the distance from the minivan window- how much of the shimmer is water vs. heat mirage is hard to tell. 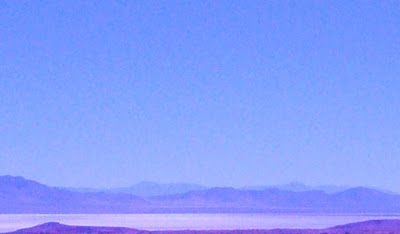 Tangent: My best views of Sevier Lake have been on my 2 climbs of nearby Notch Peak in the House Range, and from a handful of flights to Las Vegas or San Diego. Tip: Sit on the right side of the plane. Notch Peak is an easy <2>

Nested-Tangent: The cliff has a fantastic end-of-the-world feeling. About a decade ago, I had something I needed to get rid of. It was a small thing, but a Bad Thing. Throwing it in the trash wouldn’t do, and keeping it was out of the question. Inspired by the disposal of the Coke bottle in the movie The Gods Must Be Crazy, I hiked Notch Peak, alone, and hurled it off the cliff. 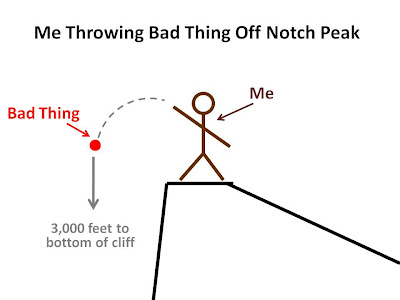 In my occasional travels past the House Range since then, it occurs to me that the Bad Thing still lies somewhere at the bottom of that ½ mile+ drop, lying amongst the talus and boulders below. Perhaps other hikers have thrown other Bad Things off the cliff. I don’t know, but who knows what lies in those rocks; it may be the West Desert version of Hell.

The length of the Sevier and the scale and the diversity of it’s basin are impressive. It’s probably the best example of an alternate-hydroverse GSL Basin, full of cool places to explore.

From Sevier Lake, US 50 climbs over the Confusion Range (What a great name, eh?) and into the Snake Valley, which is bounded on the far side by the spectacular Snake Range, home of Great Basin National Park (and the elusive Mt. Moriah as well). The hydrology of this basin counfounds me a bit; I know this valley was flooded by ancient Lake Bonneville, and so I initially assumed that it still drained North into the Salt Flats and was part of the GSL Basin. But in fact it appears that the Snake is a closed Basin, terminating in the marshes around Gandy and Trout Creek, some 40-50 miles North.

Tangent: As a rule, I avoid National Parks. Although I frequently visit cool places near National Parks, like Red Canyon and the Kaibab National Forest on the North Rim of the Grand Canyon, I’m put off by the hordes of grumpy tourists, cynical rangers, and crass, cheesy commercialism of so many parks. 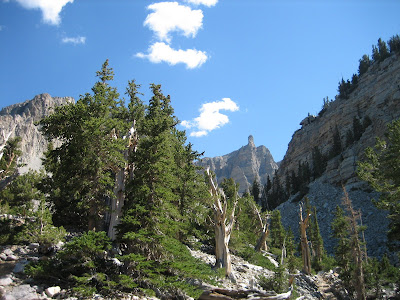 Great Basin is an exception- I love this park. It’s quiet, lightly visited, and nearly bereft of tourist facilities. The park itself is fantastic, encompassing 5 different altitude-influenced life zones. On previous trips I’ve hiked spectacular Wheeler Peak (with Canyon-Country Steve) and visited beautiful Lehman Caves with the family. On this trip we hiked up to the ancient Bristlecone grove below Wheeler Peak. 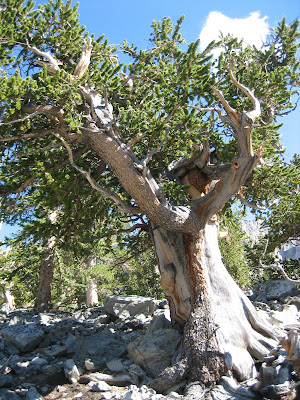 This was the 2nd time in a single week that we visited P. longavea, but unlike the Paunsaugunt Bristlecones, these babies are old, some over 4,000 years. The place is beautiful and- at least on a human scale- timeless. It looked almost the same when the Mayflower reached Plymouth, and not much different when Cheops was building his pyramid. As we hiked around Bristlecones for the 2nd time in a single week, it occurred to me what a wonderful summer this has been…

US 50 crosses the break in the Snake Range between Wheeler Peak and Mt. Moriah, then descends into the Spring Valley, another standalone, oblong basin, before crossing the Schell Creek range. The Schell Creeks are another Great Basin “Island”, capped by gorgeous 11,000-foot peaks I’ve never visited. After Connors Pass, US50 descends into… 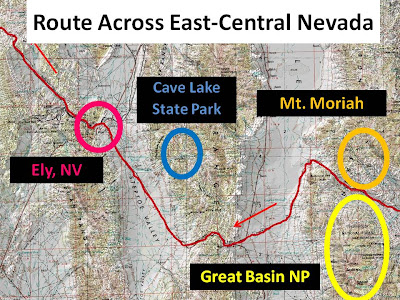 Across central Nevada, the sizeable towns lie roughly 80 miles apart each. Ely, one of those towns lies in the Southern/upper end of the Steptoe Valley drainage. We spent the night here, at a “favorite” hotel- the Ramada Copper Queen. The Trifecta loves it for its bizarre indoor pool, surrounded by slot machines. 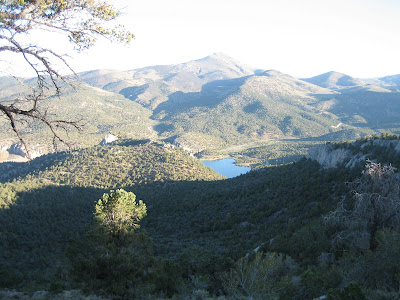 Saturday morning I was up at 4:50AM, dressed and tiptoed out, and drove in the dawn twilight to Cave Lake State Park, in the foothills of the Schell Creeks, where I parked along Steptoe Creek and went for an early morning mtn bike ride. I first visited this area in 2004, and since then they’ve built a wonderful network of singletrack, which affords a mtn biker/naturalist a wonderful, showcase Great Basin ride. 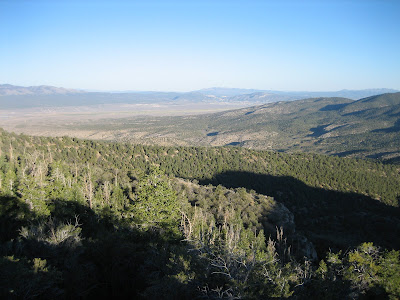 From the creek I climbed up gradually through Juniper and Single-leaf Pinon (vs. the Colorado Pinon were in the previous weekend.) A number of the Pinons were big and old- apparently pre-settlement, and this is unusual so close to a Nevada mining town. In the late 19th century, trees were cleared from as far as 50 miles away from mining towns to fuel smelters. My ride continued up into a high-sheltered pocket of White Fir- possibly a relic from cooler, wetter times- and then opened up into a pleasant woodland (pic below right) of Curlleaf Mountain Mahogany- the kind of woodland, as I’ve previously mentioned, that only seems to really thrive in the absence of Oak and Maple. 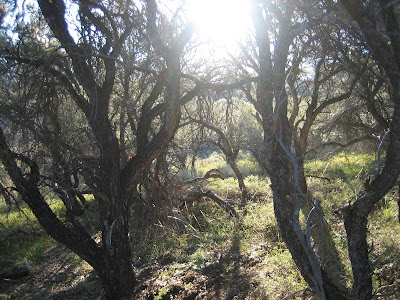 It was a wonderful ride, and it filled me with that pang I get so often on these trips- that I never get to linger, and really explore, these wonderful places in the heart of the Great Basin.

But the family was rousing, and it was time to leave this basin and get where we were going.

I have a friend that threw his wedding ring into Ngorongoro Crater in Tanzania. After my divorce, I was going to do better and hurl my wedding ring into a crater with a lava lake like the end of Lord Of the Rings. Alas, a burglar took care of the ring for me. At least I got insurance money for it but I missed out on a trip to an active volcano.

David- Gee, I thought my idea was so bold and clever and unique, and here you and your pal are casting rings into craters and lava lakes! (well, planning to, anyway) On the bright side, think of all the bad karma that burglar brought into his life...