The Unbearable Lightness of Aspen Part 1: Karma, Clones and Suckers

So I’m back home, and running out of summer. And though I’ve mentioned them in passing several times, I’ve yet to blog about Aspen. 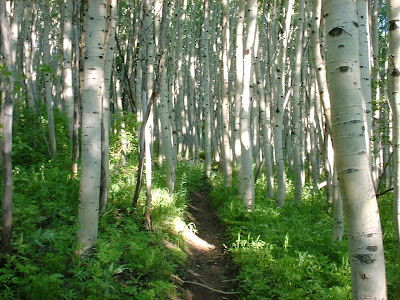 When I moved here from Colorado, in mid-summer 1995, I didn’t know a soul. My first weekend here I joined up with the Wasatch Mountain Club for a mtn bike ride around Park City. The ride was a great time, and convinced me that I’d be able to enjoy living here and make friends as well. But the thing that struck me the most from that ride was the Aspen. Endless, twisty singletrack trails winding their way through light, sunny Aspen groves.

Tangent: Joining the Wasatch Mountain Club was the single best thing I did when I moved to Utah. Though I’ve long since stopped joining them for weekly rides or weekend trips, the core of my best friends here today are people I met in or through- directly or indirectly- the club. Years ago, my friend Louis, who’s long since moved away to Portland (I still miss you buddy) commented on how many of the club members (including both of us) joined the club following a break-up or divorce, and joked that it should be renamed "The Lonely Hearts Club". He was probably right. At least 3 of my old club friends have since married other club members, and while I didn’t, the friendship and introduction to the backcountry of the Wasatch was the right tonic for my broken heart. 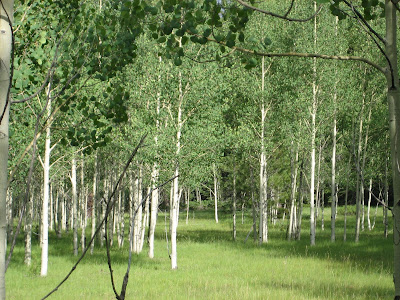 The Colorado Front Range has great Aspen as well, but not nearly as close to the places where most people live. The closest great singletrack through Aspen to Denver is the Colorado Trail at Kenosha Pass. A lovely trail, but a full hour+ drive from the city. Along the Wasatch Front, the aspen-lined singletracks are only 20-30 minutes away, up any of the canyons, over the hill in Pinebrook/Jeremy Ranch, or even right from Affleck Park. Over the last 13 years I’ve spent probably the better part of a thousand hours biking, hiking, skiing or camping in Aspen forests, and it’s been one of the highlights of my life here in Utah.

To a native Easterner, an Aspen forest is probably the strangest and most inviting forest they’ve ever seen; there’s nothing like it East of the Rockies. While Aspens grow across the continent, only West of Denver do they form vast, unbroken, monotypic forests. And the forests are lighter and, therefore cheerier, than any other North American forest. The lightness gives them an almost ethereal, not-of-this-world quality that pulls your mindset out of the day-to-day world and into another place for a short time, before re-emerging, refreshed, and almost “cleared”, back into the “real world”. 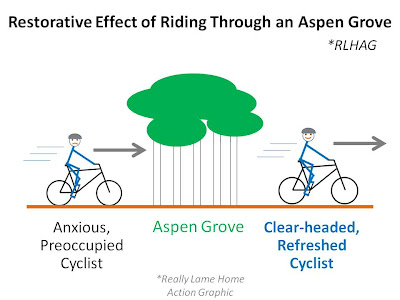 The genus Populus is part of Saliceae, the Willow Family. It includes roughly 30 species, and is broken out into 6 groupings or sections. One of those sections is Cottonwoods. Another 4 sections are various types of Poplars, both New and Old World, and the 6th section is Aspens. Two of those Aspens are native to North America. Bigtooth Aspen, Populus grandidentata, is native to the Northeastern US and Canada. The other, Quaking Aspen, Populus tremuloides, our Aspen, is the most widely distributed tree in North America, ranging from Newfoundland to California, and Alaska to Guanajuato, Mexico. The two species are closely related, and do hybridize naturally where they overlap, but not as often as you might think, because they flower at different times.

Quaking Aspen (which I’ll just call “Aspen” for the rest of this post) have boring, wind-pollinated flowers, and produce huge volumes of wind-borne seeds. But the while Aspen regularly reproduces by seed back East, and even a fair amount up in Northern Idaho and Montana, it rarely does so here in Utah or Colorado. Instead around here it reproduces overwhelmingly by root-cloning. 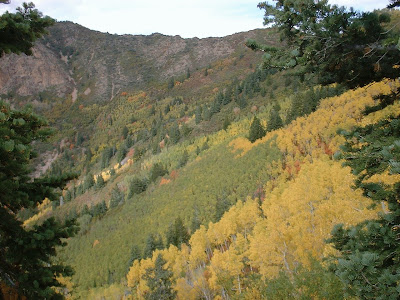 We’ve talked about root-cloning with several plants, including Creosote and Gambel Oak, but Aspen is quite possibly the champion root-cloner of them all. In Utah huge stands are single clones, so in a sense when you ride or hike through an Aspen forest, you’re traveling inside of a single living organism. From a distance in the Fall, you can often get an idea of where one clone starts and another begins by the leaf color; trees within a given clone usually change color at the same time.(Example in pic right.) 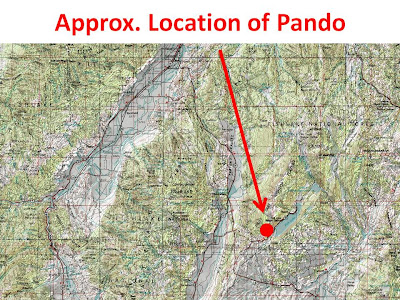 Some of these clones are huge. The current champion, a clone named “Pando” (Latin for “I spread”) lies in the Fish Lake National Forest, a couple hundred miles South of here, at about 8,800 feet. It’s thought to be the world’s largest single organism (if you count a multi-stemmed plant clone as a single organism, which is still somewhat debatable) and includes 47,000 stems spanning 107 acres. It’s thought to be more than 80,000 years old- roughly 20 times as old as the oldest Bristlecones, which means that it was around all during the last ice age, the interglacial before that, and well into the previous ice age before that. Pando has seen the world change like you and I can hardly imagine.

Tangent: There’s a continuing debate about this whole largest-organism thing- whether a clone is a single organism, whether the roots got severed between some of the trees, or whether a clone of Giant Sequoias or some fungus in Michigan. Then there’s a whole big debate about whether Pando is the oldest living thing, with some experts claiming that it’s actually more like a million years old, while others claiming that some of the Creosote clones or even some kind of Mediterranean sea grass are older. I’m not qualified to weigh in, but here’s what I will say: Pando, and other large-scale Aspen clones like it, are really big, and really old.

Amazing Nested Tangent/Factoid: In fact, Walter Cottam, probably Utah’s most accomplished botanist in the last century, suggested that the average Utah Aspen clone is over 8,000 years old. The average. Think about that the next time you hike/bike in Aspen around here; that stand has probably been in that spot since before writing was invented, before the first pyramid was built and since before your 400X great-grandfather was farming, hunting, pot-making, or whatever people did before Law and Order was around (Christ I hate that stupid show.)

It’s thought that clones are so dominant in the West in part because roughly 10,000 years ago- at the end of the last Ice Age- the climate shifted enough to create soil conditions that were relatively poorer for Aspen seedlings. And Aspen seedlings are at a considerable disadvantage to begin with relative to “clone-seedling”, which are called “suckers.” (Is that great or what?)

A seedling of Aspen- or any angiosperm- survives its initial sprouting and rooting stages fueled only by the triploid endosperm it’s packaged with (see this post for review on creation/design of an angiosperm seed.) As soon as possible, the seedling needs to start photosynthesizing to fuel continued growth. And that seedling- the shortest thing around- is often in a tough spot on the forest floor trying to compete for sunlight with neighboring 50 or 100 foot-high giants. 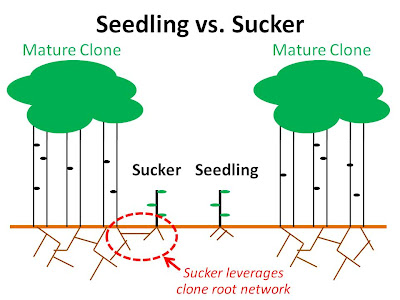 A sucker on the other hand is born with a ready, fully functional root system- it doesn’t need to grow one. And that same, clonal, interconnected root network carries needed nutrients to the sucker to fuel its initial growth. Side by side, an Aspen sucker usually has a huge advantage over an Aspen seedling.

Next Up: More Cloning, Bark, Old Carvings and Good Karma

I found this article on the aspen clones to be very interesting, very useful....marvelous bit of work!