How a Rainbow Works 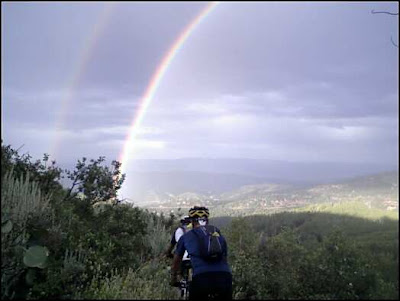 Tuesday night I had a great ride with a couple of friends up in Park City. The highlight of the ride was a brief rainstorm followed by this, awesome, full-complete-across-the-sky double rainbow. It was one of the best rainbows I’d ever seen, and of course I didn’t have my camera with me, so these are the best pix I could get with my hated camera phone. The riders in the pic left are my friends Paul and (mostly blocked by Paul) Organic Chemistry Professor Rick. 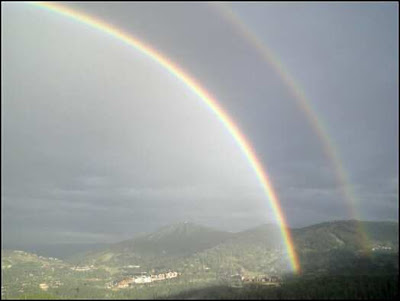 I knew I’d post the photos here, but didn’t think I’d bother with an explanation of how a rainbow works because, well… I kinda thought everybody knew how a rainbow works. And besides, I’ve generally steered this blog more towards how biological stuff works, like chemistry and genetics and such. But over the course of the last day, I’ve chatted with a few coworkers in the office and at lunch, and it turns out that almost nobody knows how a rainbow works, much less a double rainbow. And the biggest surprise was that one of my coworkers I had lunch with- let’s call him “Matt”- is a really, really smart guy, and even he had no idea. 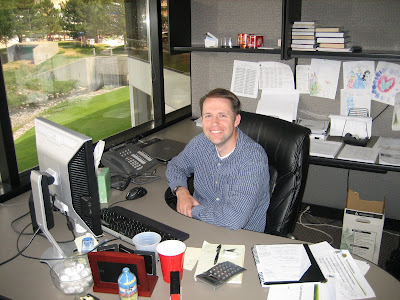 Tangent: Here’s a picture of "Matt". You can tell he’s wicked smart because he’s working with computers and stuff...

So apparently, most people don’t know how a rainbow works. But a rainbow is so beautiful and amazing, and actually not all that complicated- unlike ring meiosis in Evening Primrose, or how angiosperms work for example (man, was that a cool post or what?) Clearly, everybody should understand how a rainbow works, especially smart people. So Matt, this post’s for you.

The great thing about how a rainbow works is that you only have to understand one little scientific concept: refraction. Refraction is a change in the direction of travel in a wave caused by a change in its speed. It doesn’t matter what kind of wave you’re talking about. Let’s use ocean waves as an example:

When an ocean wave moves from deep water to shallow water, it slows down. When it slows down, it changes direction, as the shallow-water end trails the deep-water end. This is why waves generally seem parallel to the beach. 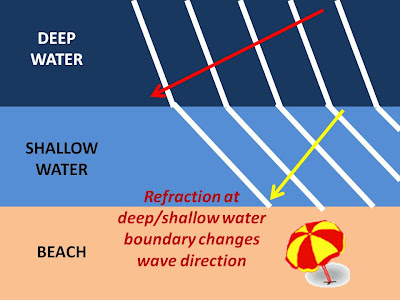 Light travels more slowly through water or glass than through air (or through air than a vacuum, like outer space), and when it crosses a fast/slow boundary it changes direction. Prescription eyeglasses use this principle to deliberately alter the path of incoming light to better position images on the retina of the eyeball and improve vision. (And the lens of your eye of course does the same thing.) OK, so far, so good.

Matt, you still with me?

But the really cool thing about refraction is that the higher the frequency of the wave, the more its direction of travel will be altered. (Read that last part again, Matt, or you won't get the rest.) 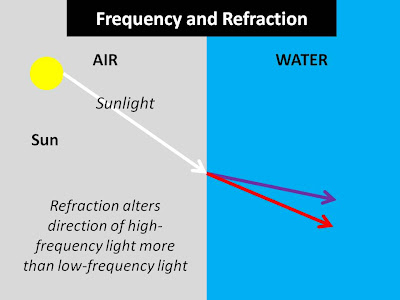 Tangent: At this point, you may object that the sun is yellow, not white. But if you were in outer space, you would see that the sun is fact white. The sun appears yellow on earth- and the sky blue- due to something called the Rayleigh Effect, which is a cumulative molecular-refractive scattering effect on a massive scale, and a bit complicated for the kiddie-type science we're discussing here today... 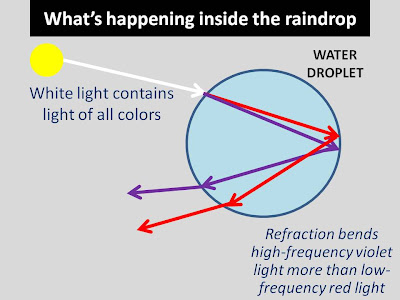 When sunlight hits a raindrop, some portion of the sunlight is reflected back off the surface of the droplet. But the rest enters the drop, and as it does so, the violet and blue light changes direction more sharply than the red and orange light. The light then travels through the raindrop to the opposite side, where again, some portion of the light passes through the water/air boundary, while the rest is reflected back.

Side note: The portion of light that is reflected (vs. passed through) the air water boundary depends on 2 things: the angle at which the light hits the transitional surface, and the refractive indices of the media in question. In general, denser stuff (water glass) has a higher refractive index than less-dense stuff (air.)

When the reflected light returns to the side of the raindrop facing the sun (and the observer), some portion of it traverses the water/air boundary. As it does so it undergoes refraction a second time, and again, the direction of the violet and blue light is changed more than the direction of the red and orange light. And because of this, depending on where you are, only red or violet (or blue or green or yellow or orange) light will reach your eyes. Because the violet light is “bent” the most, it appears to always be on the bottom of the rainbow, while the red light, “bent” the least, always appears on top. 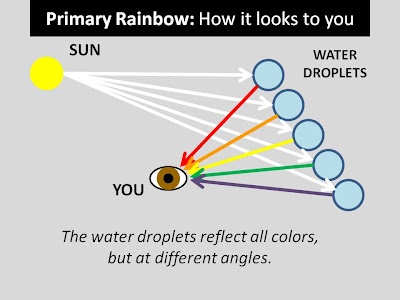 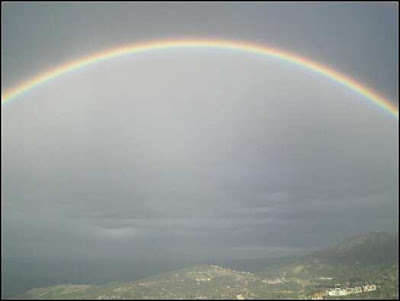 The reason the rainbow appears to be an arc is that as you move to the visual left or right from the direction exactly opposite the sun, the water droplets that reflect back to your eye the respective refracted colors will be positioned lower in the sky. (I couldn’t do a good graphic of this one, but think about it for a minute and it’ll make sense.)

Side note: An interesting thing about rainbows is that they only work when the sun is lower than 42 degrees in the sky. Higher than that, and all the refracted light will be reflected back too high for a surface observer to see. (Observers in aircraft can see rainbows when the sun is much higher; they’ll see them below, as circles, not arcs.)

OK, so what about a double rainbow?

So when then the internally-reflected refracted light returns to the surface of the water drop, some portion of it is reflected again, then traverses the drop a third time, and then (mostly) exits the drop, undergoing refraction (for a 2nd time) as it does so. 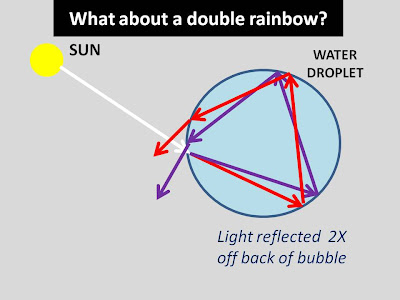 But now, three things are different. First, its downward angle is greater, so that the resultant rainbow appears to be higher in the sky. Second, because so much more of the light has been “lost” as light passed through on the previous reflection/refraction surface encounter, the secondary rainbow always appears much fainter than the primary. 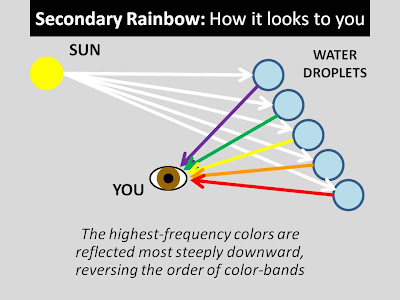 And third, the 2nd internal reflection effectively inverts the exit angles of the various wavelengths relative to a ground observer, such that violet light exits the raindrop at a steeper angle than red light, making the bottom of the secondary rainbow red, and the top violet. 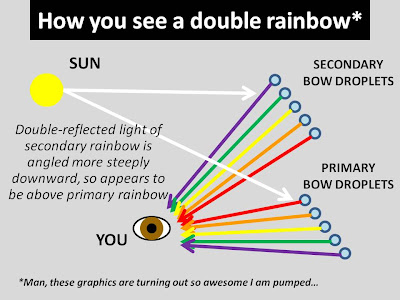 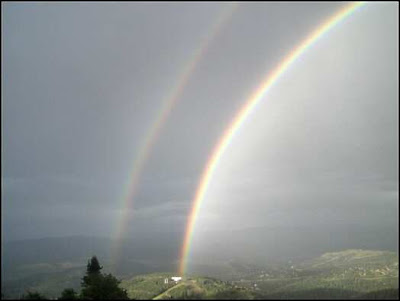 OK, that’s enough kiddie-science. Let’s get back to the complicated stuff.

Very informative--- I knew, sort-of, how rainbows work, and now I know, really, how they work! :) Great post, great pictures!

Hi Kristen- glad you liked it, I had fun writing this one!

"Light travels more slowly through water or glass than through air (or through air than a vacuum, like outer space)"

you should do a post explaining variations in the speed of light. in a kiddie science kind of way.

you know. if you take requests.

Dug- I sort of take requests, kind of like an unreliable contractor will sort of eventually remodel your kitchen. Meaning I do them if it interests me and I think I can get it into a post that people might read. The 1st question is yes, but the 2nd is tougher, as I need to figure out a "kiddie science" way to explain the wave/particle duality of EM radiation. Let me stew on it...

I stumbled on to you blog while looking for an explaination of rainbows for my 9th grade physics class! Good Stuff! Thanks!

Anon- glad I could help. Good luck with the homework!

Thanks so much! This was really informative, I too, have homework, and a test on the bending of light, and this helped a lot!

Would love to use your rainbow diagram in a book. Anyway to get a hi res scan of the image?

Weird Stuff Mothers Do- I may still have the original PowerPoint deck I used to create the graphics around. Send an email to adventureREMOVECAPSbotanist@yahoo.com, and I can locate/send it to you.