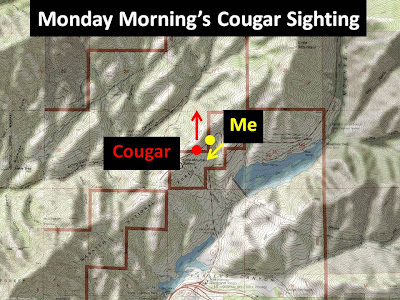 This morning, while doing one of my standard road-bike training rides, Big Mountain Pass and back, I saw a Mountain Lion. I saw it crossing the road, about 100 meters ahead of me, as about 2/3 of the way up the return climb up Little Mountain Pass. Just like the other time I saw a Mountain Lion (see below) I at first took it for a large, tan dog, before realizing the tail was way too long and the head the wrong shape. It cantered across the road from South to North. I slowed down, killed my iPod, crossed to the left side of the road and pedaled cautiously up to the crossing-point, where I saw no sign of it.

Things That Can Kill And Eat You Are Always Interesting 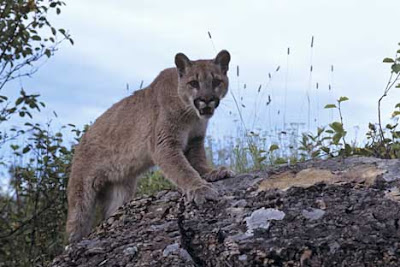 Mountain Lions, Felis concolor or Puma concolor, are fascinating for so many reasons, but I think the absolutely most interesting thing about them is that in much of the West they’re the only thing with any likelihood of deliberately trying to kill and eat you. Here in the Wasatch a boy was killed by a Black Bear last year, but Black Bears almost never seem to deliberately stalk and hunt humans. Grizzlies sometimes do, but they’re at least 300 miles away from here. (Note: pic right is not mine. The whole thing happened way too fast to dig out hated camera-phone.)

For as long as I’ve been living in the West, hiking and mountain biking alone as often as I do, I’ve always paid close attention to reports of cougar encounters or attacks. I remember the first one clearly. It was in the summer of 1991, and the victim was an 18-year high-school senior in Idaho Springs, CO, about 30 miles from where I was living at the time. He was running a trail, alone, shortly after dawn, training for mountain bike racing. As a bike racer who gets most of his trail time alone at dawn, that one still hits close to home for me. Whenever I hear of a cougar attack I think of that kid. He’d be 35 now.

You could do a whole blog on cougars, but I’ll zero in on just one thing that fascinates me about them before returning to them in the Wasatch: their distribution and origin. Cougars have the widest distribution of any large native mammal in the Western hemisphere, occurring from the Yukon, clear down across the Western US, through Mexico and Central America, and then all over South America clear. The story of how they got here is amazing.

About 8 million years ago, the common feline ancestor of today’s cougars, ocelots, lynxes, jaguarundi and a bunch of now-extinct cats, such as the North American Cheetah, migrated to North America across Beringia (Bering land bridge.) Here they developed into a number of different species over the next 5 million years. 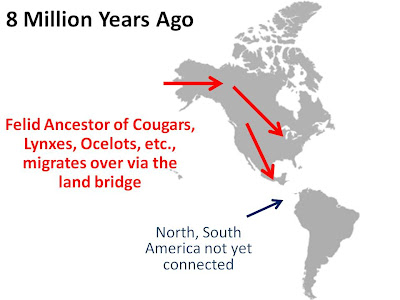 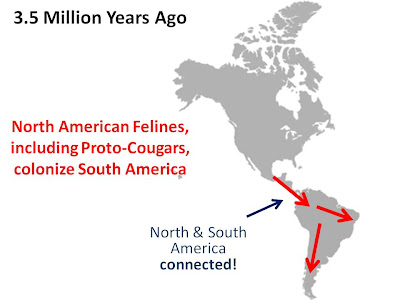 Over the next 3.5 million years, cougars evolved and thrived. But around 12,000 years ago, coincident with the large-scale arrival of humans in the Americas and end of the Ice Age, cougars were caught up in the Pleistocene extinction, most likely the result of the Overkill Hypothesis, which we talked about when we looked at Moose. 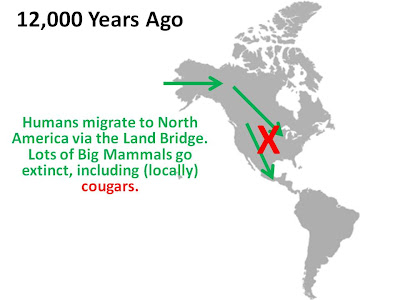 Then, sometime following, during the past 10,000 years, cougars from Central/South America successfully re-colonized North America. Biologists figured this out by looking at the DNA (specifically mtDNA) of North American cougars, found they were all closely and recently related, and then looked at the mtDNA relationships between North, Central and South American cougars. 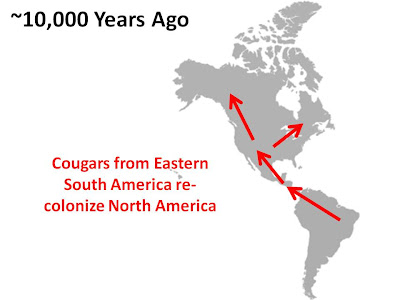 Side Note: The Taxonomy of cougars is still the subject of debate. Historically they’ve been placed in the genus Felis, which includes Felis catus, the domestic cat. But lately biologists have reclassified it in a new genus, Puma, along with the Jaguarundi, P. yagouaroundi. Then there are the various subspecies throughout the hemisphere, which until recently numbered as many as 32, but now look to be more like 6.

Tangent: I considered doing a tangent to explain mtDNA, which is fascinating, important, and not all that complicated (at least the concept anyway), but this post is getting long enough. I’ll do it in some other post.

So, like Moose, the mountain lions we see in Utah today are “newer than Indians.” Over the last couple of centuries they’ve taken a beating again at the hands of European settlers, but seem to be on the rebound today. (Cool trivia: Cougars don’t eat carrion, which has made them less vulnerable than wolves to deliberate poisoning efforts.)

The only other time I’ve seen a cougar, back in 2001, was from a car window, but under remarkably similar circumstances: crossing a road ahead of me in early morning. I’ve seen other signs over the last several years- a recent deer kill, fresh prints while hiking with Twin A- but never another live one. 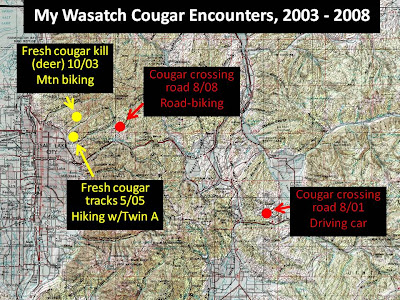 And since cougars can’t be spending the majority of their time crossing paved roads, I wonder why I haven’t seen one during my countless hours on trails or bushwhacking in the foothills. I suspect I’ve seen them only on pavement for 2 reasons.

Why Don't I See Them More Often?

First, they stand out clearly against asphalt; their camouflage is completely negated. Second, when driving or cycling, one’s attention is overwhelmingly focused on the very limited field of view of the road immediately ahead, far more than one’s view is ever focused at a given stand of oak or maple or mountain mahogany off a few hundred meters to the side of the trail. In short, I’m sure cougars have seen me dozens if not hundreds of times hiking or biking in the Wasatch- I’m just not seeing them.

Sometimes, when you get that feeling that someone is watching you- they are.

Great post on cougars. This is the particular species of cougar I was referring to.

I just went for a hike on the pipeline trail, the section above "This is the place." About twenty minutes on the trail towards Emigrpation Canyon I saw what I initially took to be a large dog walking away from me along the trail. Then I realized that the tail was way too long. It was about twenty yards ahead of me and looked like it was after something.... What a rush!
Turned around and walked away as quickly as I could.
This is the first time I've gone hiking in maybe ten years. Thanks for your posts. I think I'll start hiking again...

Pierre- Wow! That's only about 1/2 mile from my house. And you spotted it on your 1st hike in 10 years? That's some great wildlife-spotting karma you've got! Thanks for letting me know-