Tahoe Trees: I Have A Crush On Sierra Forests

So the greatest thing about crossing the Great Basin is when you finally get to the other side, there’s another cool, forested world to explore, but this one’s completely different from the forests of the Wasatch. 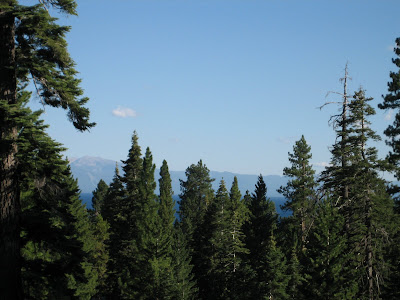 The forests of the Sierra Nevada are arguably the most pleasant, appealing coniferous forests in the world. Open, with towering trees, minimal underbrush, lots of shade, virtually no bugs and perfect summer temps. It’s hard to spend even a day or two hiking or biking around these forests and not fall a little bit in love with the Sierra.

Unlike the Wasatch, with its extensive stretches of Aspen up high, and Oak & Maple lower down. The Sierra forest is overwhelmingly coniferous. And the mix of PLTs (see this post for acronym explanation) is way, way different.

To begin with, there are no Douglas Firs and no Spruces. California has great representatives of each of these genera, but they’re creatures of the coastal forests, unable to handle the tough Sierra winters. Coastal Douglas Fir, Pseudotsuga mensziesii menziesii, which we talked about briefly when looking at its Utah cousin, is all over Northwestern California, but is too easily damaged by frost to survive in the Sierras. And Rocky Mountain Douglas Fir, which appears capable of handling Sierra winters, has never made it across the Great Basin.

Similarly, Sitka Spruce, a common and very successful Northwest tree from California to Alaska, does well on the coast but can’t handle a Sierra Winter either. Engelmann Spruce could, and though, like Rocky Mountain Douglas Fir, it’s mainly confined to the Eastern shore of the Basin, several groves have been found in the Siskiyou and Shasta counties far to the North. Perhaps given enough time, Picea Engelmannii might one day colonize the Sierra.

Firs, however, are very much present. White Fir (I just want to say that that post had like the Best Tangent Ever...) especially thrives in the Sierra (even more so in the last century due to fire suppression, and it’s the most familiar-looking tree to any visiting Wasatch tree-lover. But the White Fir is a bit different here, slightly longer needled, and depending on what source you go by, either a distinct variety, Abies concolor iowiana, or a separate species, Abies iowiana. Anyway, it looks pretty much the same to me as the White Fir back home. 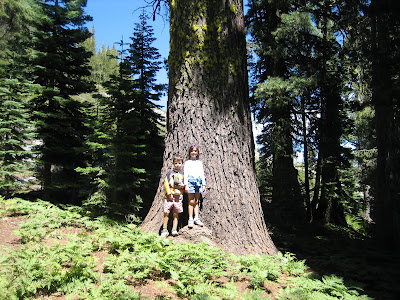 There’s no Subalpine Fir in the Sierra (though curiously, like Engelmann Spruce, it pops up in isolated groves in the Salmon and Marble mountains far to the North and West) but the absence is more than made up for with the gorgeous Red Fir, Abies magnifica. (pic left, Twins A&B for scale) 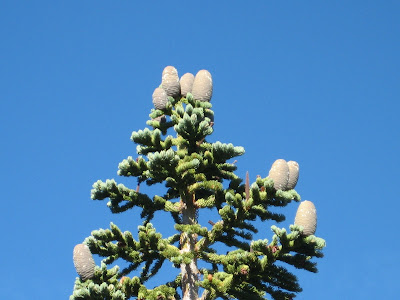 This is beautiful tree, with dark, chocolatey-reddish bark, often moss-covered on the side away from the sun, and fat, upright, always-out-of-reach cones (pic right). It grows quickly to impressive height and girth. On the West side of the lake in particular, it really seems to dominate the forest in almost pure stands between 7,000 and 8,500 feet.

But the biggest difference between the PLTs of the Wasatch and those of the Sierra is all the PINES. Real pines, tall pines, everywhere you go. There are 5 species you commonly come across, two 3-needled, two 5-needled and one 2-needled. 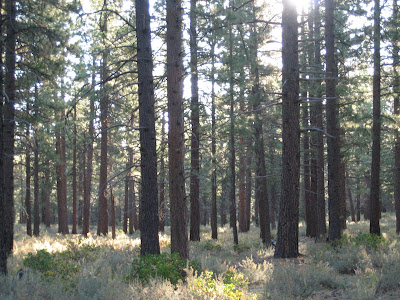 The two 3-needled species, Ponderosa, and the closely-related Jeffrey Pine, Pinus jeffreyii, are the first trees one encounters climbing out of Reno to the West. Ponderosa of course occurs in lots of places in Utah outside of the Wasatch, but Jeffrey Pine occurs only in California, Oregon, and Northern Baja. 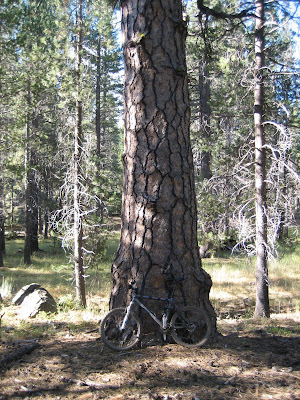 The two look similar, but Jeffrey has way bigger cones, with the prickles turned downward so that they’re usually easier to pick up. Jeffrey bark usually also has a distinctive vanilla smell, but Ponderosas (pic right of big one with bike for scale) occasionally do as well (including a few of the old relics down on Little Creek Mountain.) 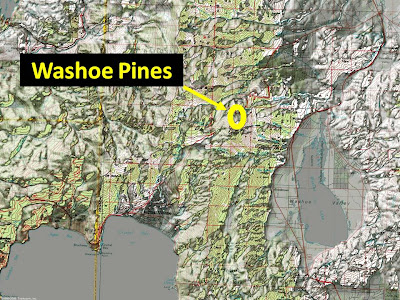 Tangent: There is a third 3-needle pine, super-rare, that occurs just outside of the Tahoe Basin in the Galena Creek area on the Northeastern flank of Mount Rode. It’s Washoe Pine, Pinus washoensis. It’s very hard to distinguish from Ponderosa, but the surest way is the cones, which are basically like little Jeffrey cones- easy to pick up, but Ponderosa-sized. Washoe Pine exists only here and in a couple of other scattered locations, most notably the Warner Mountains far to the North in Modoc County. Last year, following a bit of detective work and cold calls to several rangers, the family and I located Washoe Pine and collected cones on Mt. Rose. For the past 60 or 70 years, botanists have been arguing whether P. washoensis is in fact a distinct species, a hybrid of Jeffrey and Ponderosa, or simply a variety of Ponderosa. At any rate, it’s easy enough to find, so I’ve included the map here.

The two 5-needled pines in Tahoe are Sugar Pine and Western White Pine, and unlike the two 3-needled pines, they almost never seem to occur together. 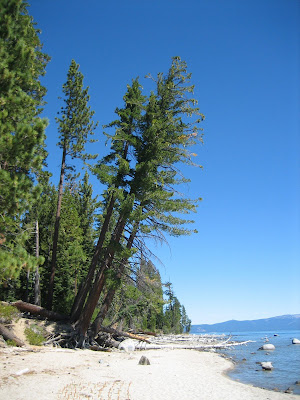 Sugar Pine, Pinus lambertiana, prefers slightly lower altitudes. It’s common on the shores and in the towns ringing the lake, but I’ve never seen one over 7,000 feet. 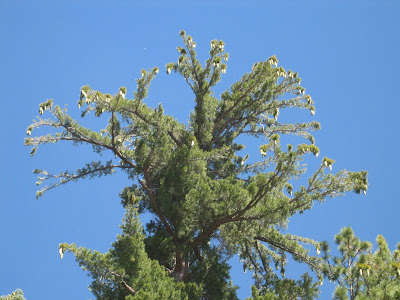 Sugar Pine is the world’s tallest pine, and has the largest cones of any conifer. It is simply magnificent- one of my favorite trees anywhere, and the forests of the Wasatch are poorer for having nothing like it. It’s native only to California and Oregon. 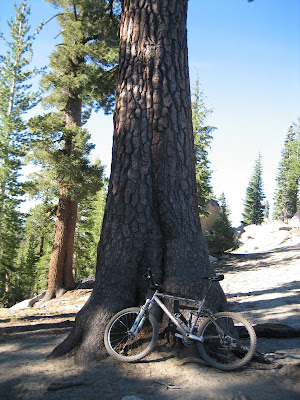 Western White Pine, Pinus monticola, (pic left, bike for scale) is closely-related to Eastern White Pine, which we saw last month back East, and looks very similar in cone, needle and bark, though both trees and cones here reach greater size than anything I saw in New England. Unlike Sugar Pine, Western White Pine is native to the Rockies (and is the state tree of Idaho) but only farther North, never making it down as far at Utah. 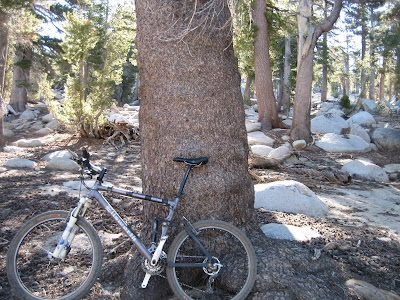 f you find a 2-needled pine around Tahoe, it’s Lodgepole Pine, Pinus contorta, (pic left, bike for scale- OK this theme is getting old. Let's try a "pure stand" shot, right) and this is another common pine in Utah. 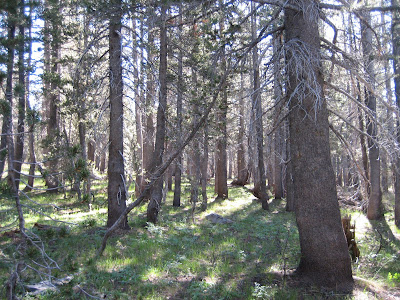 Not in the Wasatch, but it’s super-common in the nearby Uintas. But the Lodgepoles in Tahoe, which seem to thrive mainly above 8,000 feet, often grow taller, bigger and fatter than any I’ve seen in the Uintas.

After months of looking for, and wondering/noodling about the oh-so-rare pines of the Wasatch, the explosion of pines in the Sierra was a welcome change, and even without the lake, they would have made the trip for me. But there are 2 other Sierra trees I came across last week worth mentioning. 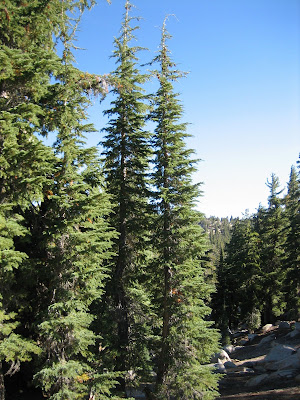 The first is a Hemlock. Last month in Maine I talked about Eastern Hemlock. Back in June we saw Western Hemlock out by Mendocino. And in Tahoe this past week I mtn biked through a great stand of Mountain Hemlock, Tsuga mertensiana. That makes 3 of the 4 native U.S. Hemlocks I’ve seen in a single summer. (Man, this summer is turning out great!) Mountain Hemlock is markedly different from Western or Eastern Hemlock. The needles are square in cross-section, like a Spruce, and unlike other Hemlocks. 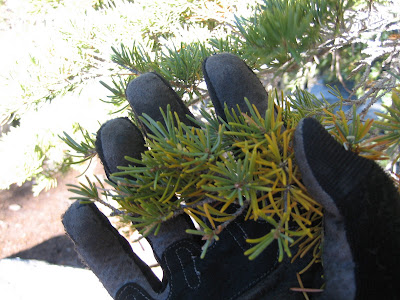 And they grow out of the twig in all directions- again like a Spruce, rather than in 2 flat planar sprays, like Western or Eastern Hemlock. And finally the cones, while a modest 1-2” long, are massive by Hemlock standards. Mountain Hemlock confounded 19th century botanists, who suspected it to be a Hemlock-Spruce hybrid, and John Muir himself referred to the tree as “Hemlock-Spruce.” But a Hemlock it is, and – though not a terribly common Sierra PLT- a fine-looking Hemlock at that. 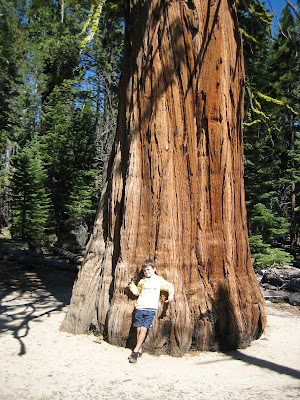 The final Sierra PLT I’ll mention is by far the most alien to an observer familiar with forests of the Rockies or the East: Incense Cedar, Calocedrus decurrens.(pic left, Twin A for scale) This tree has deeply-furrowed, peeling, almost papery bark, and scale-like needles that are more like those of a Juniper than those of any other PLT. In fact it’s somewhat reminiscent of, and often mistaken for, the Giant Sequoia, Sequoiadendron giganteum. 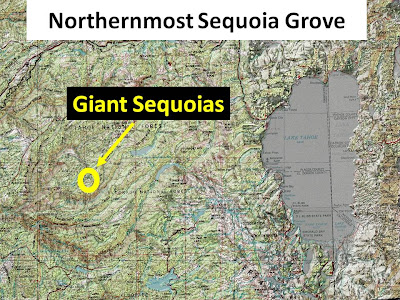 Tangent: Regrettably, our trip did not include any Giant Sequoias. These amazing giants grow in only 75 groves along the West slope of the Sierra. Although the Northernmost of these 75 groves lies a mere 50 miles from Lake Tahoe as the Corvid flies, it’s an twisty ~135 road miles to reach it from Tahoe Vista- too long a day-trip for the Trifecta…

Nested Tangent: Speaking of Corvids, I've never seen so many Stellers Jays anywhere as I did around Tahoe. Those birds are everywhere with their signature squawk... 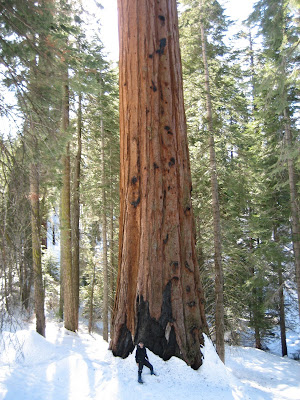 Return-to-Main-Tangent: As a consolation, here's a pic of me by a Giant Sequoia further South back in February, when I was visiting my brother (Let's-Call-Him-Phil) while he was still living near Fresno.

Incense Cedar is almost never found above 7,000 feet, and in the Tahoe Basin it’s found, like Sugar Pine, down close to the lake and in the communities ringing the shore. The backyard of our rental home had several wonderful specimens. Incense cedar has fire-resistant bark (like Giant Sequoia) and fairly rot-resistant wood. And even if you’ve never been anywhere near the Sierra, you’ve undoubtedly touched its wood thousands of times; Incense Cedar wood is the wood most commonly used for pencils, because it’s soft and sharpens easily without splintering.

Incense Cedar is also interesting to tree-geeks because, like Douglas Fir, it’s another example of a tree named wrong. 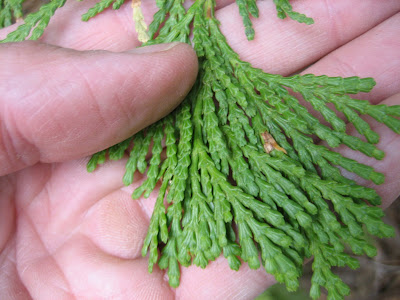 There are no true cedars in the Western Hemisphere. True Cedars are a trees belonging to the genus Cedrus, found across Eurasia. When early botanist-explorers found Incense Cedar (and Western Red Cedar in the Northwest, and Northern Whitecedar back East) they’d never come across anything quite like it, so they named it after the trees most similar to it that they were familiar with: old world cedars.

But Incense Cedar (pic left = needles in hand) belongs to the genus Calocedrus, which contains just 2 other species: one in China and one in Taiwan. (Both have long been popular wood for coffins, and are nowadays somewhat rare as a result.) Incense Cedar is alien but elegant- it stands firmly outside of Pinaceae, the Pine family, a fundamentally different way of being a PLT.

One last odd factoid about Incense Cedar: it pollinates right around New Year’s, causing hay-fever-like symptoms in allergic residents and visitors alike in the dead of winter.

We drove home in one long day, following the path of the Humboldt River along I-80 for most of the way. After the foothills outside of Reno, we didn’t pass another non-planted roadside tree for 340 miles, till we passed through a woodland Utah Juniper and Singleleaf Pinon while crossing the Pequop range, East of Wells, NV.

Since 2002 Dick Wolf has leased the giant trees of Sequoia National Forest for use as a broadcast repeater for the "Law & Order" franchise. The Pleiadean market for Elisabeth Rohm is a growing one, apparently.

HELLO IWAS WONDER WHERE THE LARGE INCENSE CEDAR THE BOY IS STANDING INFRONT OF IS IN TAHOE???

Anon- Sugar Pine Point State Park, on the West shore of the lake. That tree is right along the beach.

I was just there, at Sugar Pine Point State Park last week and took photos of the incense cedar. It was so beautiful!
I'm in love with this tree.

It's always nice to find another tree lover. For your next trip to Tahoe, look for Douglas Fir at Emerald Bay State Park, or Burton Creek State Park--they have been reported from there.