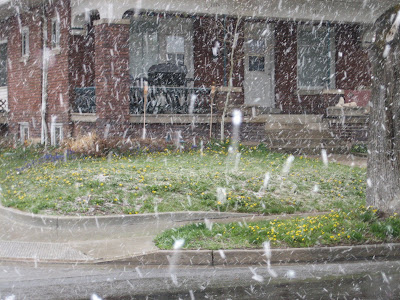 So the last week or so I’ve been noticing dandelions all over town- on people’s lawns, in office parks, city parks, wherever. And it occurred to me that I knew absolutely nothing about dandelions. And so, in the spirit of “Watching the World Wake Up”, I’ve spent much of the last few days learning everything I could about dandelions. And here’s what I learned: Dandelions are amazingly, unbelievably, almost freakishly way cool.

Side note: Driving across town in a Spring snowstorm yesterday I came across this house. Look at this guy's yard- it's like he said, "Hey I like dandelions, why weed 'em?" Right on, brother. (Que yo tuviera sus conojes...) I call this house the "House of 1000 Dandelions", and I should've jotted down the address, but it's on the East side 500 East, I think between 1700S and 1300S.

There are somewhere between 60 and 250 species of Dandelion (genus = Taraxacum) in the world. (The reason for this wide range won’t make sense until I explain the bizarre genetics of Dandelion reproduction.) The species we’re most common with in , as well as throughout the continental US, is Taraxacum officinale.

Dandelions look obviously different from the flowers I’ve highlighted up till now. And that’s because dandelions are composite flowers. 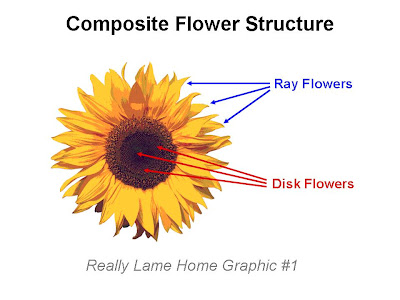 An ordinary, non-composite flower typically has the standard physical structure I described when talking about Glacier lilies- a single pistil, surrounded by several stamens, surrounded, by petals surrounded by sepals… But a composite flower has not one, but multiple little flowers growing out of the same head. So when you look at a Dandelion or a Sunflower or a Black-Eyed Susan, you’re not looking at just one flower, but rather at dozens or even hundreds of miniaturized flowers.

From an evolutionary standpoint, composite flowers are almost certainly more recent development than the Standard Blossom. A flower head that can generate dozens or hundreds of fertilized seeds can realize huge efficiencies of resources over a Standard Blossom. And as a result, Composite flowers have been wildly successful- something like 20,000 species across 101 genera, on every continent except .

Side note: Believe it or not, actually does have native flowering plants, specifically 2 species of grass.

1- Flowers composed of ray and disk flowers. In addition to Sunflowers, this group would include Black-eyed Susans and Asters. 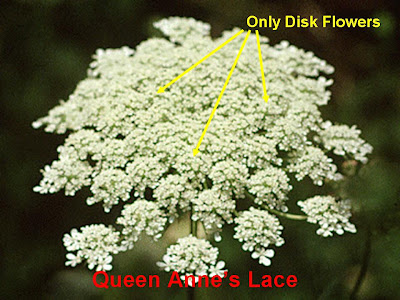 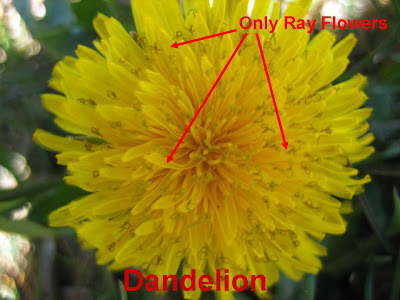 2- Flowers composed of only disk flowers. Think of Queen Anne’s Lace. It’s got no “petals”, right? Actually what it lacks is ray flowers. Most thistles fall into this category as well.

3- Flowers composed only of ray flowers, which includes of course, Dandelions. 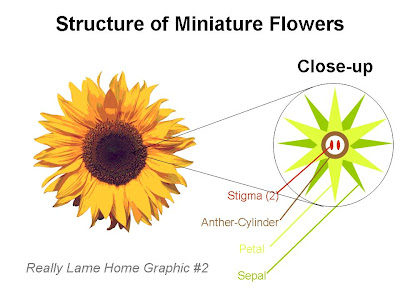 Composite flowers have a couple of other structural developments in common. Specifically, their miniaturized flowers (whether disk or ray) always have either 4 or 5 stamens (male parts), and the anthers of these stamens are actually fused together to form a cylinder around the style (central column) of the pistil (female part). The style passes up through the anther-cylinder and is topped by 2 stigmas. The ovule itself is located way, way down below the petals and sepals of the miniaturized flower, not in the center of them, as in the Standard Blossom.

In short when you look at a Dandelion, you’re looking at a composite ray-only flower, a far more sophisticated and evolutionarily advanced design than the simple Glacier Lily.

Tangent: The development of composite flowers seems wonderfully analogous to the evolution of multicellular organism, as well as the more recent (but still ancient) development of social insects. In all cases, the various parts working together realize greater efficiencies and can accomplish greater things- namely more successful replication of themselves- than they could acting independently. This evolution of greater complexity through multiple parts working tandem seems to happen over and over again in life. In most cases- say the evolution of red algae- we can’t directly appreciate it without delving into a textbook full of diagrams. But with composite flowers, we can marvel at the increasing complexity aspect of evolution every time we pick a Dandelion. 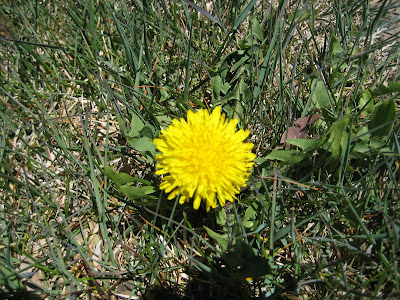 Dandelions have a pollination/dispersal methodology that is the converse of the Blackbrush schema I described last week. Where Blackbrush is wind-pollinated and its seeds agent (usually rodent)-dispersed, Dandelions are agent (usually Bumblebee)-pollinated, and- as every schoolchild knows- wind-dispersed. The parachutes of Dandelion seeds are actually the sepals of the miniaturized flowers, which following fertilization dry up and remain attached to the new seed, allowing it to be blown afar. 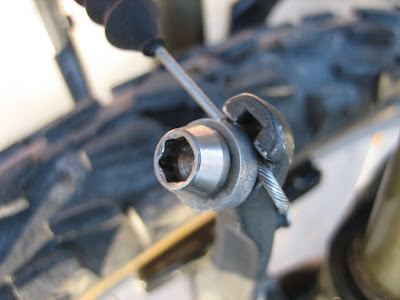 Tangent: Over the past week I’ve been building a back-up mountain bike in my garage. (Long-story short: I had a 9-year Titanium frame from an older bike that developed a crack, was rebuilt under warranty, and I collected “modern” parts from various sources to build up a nice, light stiff back-up bike, for the next time the frame on my primary bike breaks- which it inevitably will.) In the final cabling stage, I realized that I’d lost a special bolt and washer that attaches the brake cable to the brake. I dug around through my box of orphan bike parts and scrounged a bolt and washer designed for a completely different purpose that worked perfectly.

The Dandelion-Calyx-turned-Parachute story is evolution doing exactly the same thing as I did with my bike, and evolution does it over and over again. Human hands are a great example (re-purposed forepaws.) So are vocal chords, wings (insect, bird and bat) and the lenses of camera-style eyes (transparent protective coating developed into refractive lens.) This is one of the coolest aspects of evolution, and again, you can appreciate it every time you blow the seeds off a dandelion head.

Next up: The Wild World of Dandelion Genetics

Thank you for this ^w^
I really needed a couple more facts on dandelions for my biology essay and this helped me :D

it didn`t help the persons who makes this web needs more info :-(

why not talk about other cool things about Dandelions?

The fact that Box Turtles and Rabbits LOVE them, that they are medicinal and edible, that herbalists use them as a diuretic (to make you pee), that they were introduced from Europe, that the stems contain latex which can be made into rubber, that you can eat all aboveground parts of the dandelion raw and make the root into coffee and they're incredibly nutritious, and... you can even make the flowers into a fantastic summery tasting wine!