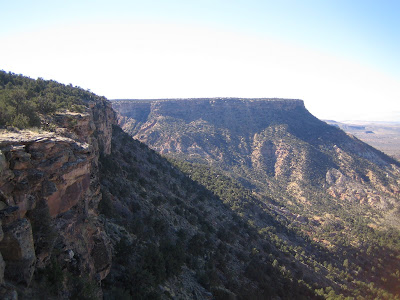 If I had to pick a favorite place in the world, it might well be Little Creek Mountain. Little Creek is a flat-topped mesa about 8 miles wide by 6 miles across, roughly 5600 – 5800 feet in elevation. It’s covered overwhelmingly by Piñon and Juniper, but also features extensive shrubland and open expanses of rolling slickrock. It’s owned mostly by the BLM and features a fantastic network of unofficial mountain bike trails. 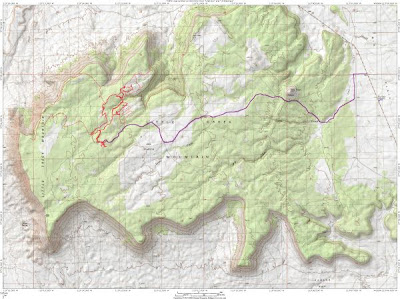 Tangent #1- Background: The nearby Gooseberry Mesa system of trails was built almost entirely by Morgan and Mike Harris of Hurricane, UT, twin mountain-biking grandfathers who built/marked most of the trails when they were in their 50’s. In April 1996, on my first trip to the area, I stumbled onto the (then unfinished) Gooseberry trail network and ran into the Harris brothers on the trail and again back at the trailhead. I ran into them again on my second trip a few months later, exchanged contact info, and was fortunate enough to ride with and be guided by them many, many times. In early 1997 they started talking about a new trail network they were developing on the next mesa to the South- Little Creek Mountain. In October 1997 I attended a company retreat down in Brian Head, took a day off afterward, and met Mike & Morg on Little Creek. At the time, fewer than 20 people had ridden the Little Creek trails.

The Little Creek trails differ from Gooseberry in that they’re a bit less technical, feature longer stretches of both singletrack and slickrock, and require much more focused route-finding.

Tangent-to-Tangent (Nested Tangent?): In 2006 Morg came across a couple who’d actually spent the night out on the trail, becoming lost on an afternoon ride.

The Piñon-Juniper woodland on Little Creek feels more “woods”-like, shaded and disorienting than on Gooseberry, mainly due to the ~300-400 ft higher elevation and greater rain/snowfall. Although it’s visited far more often than it was a decade ago, it still feels like a strange cross between Western desert and enchanted forest- the Southwest Uplands at its best.

There are so many wonderful things to go on about on Little Creek, but I’ll limit myself to just 2- one short and one long. 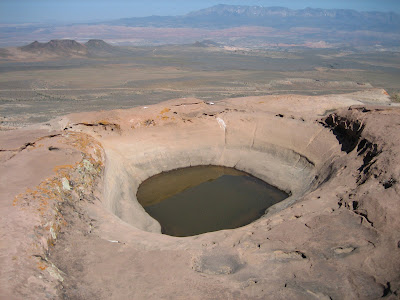 The slickrock expanses on Little Creek feature many tiñajas, including this one (nicknamed the “Jacuzzi”.) Much of the year they’re dry, but in the spring they usually have water, and some- particularly deeper ones like the Jacuzzi- actually have water-critters living inside them. Check out this photo of one of the many tiny sea-monkey-brine-shimp-like crustaceans living in the Jacuzzi. What a strange, weird universe they must live in. 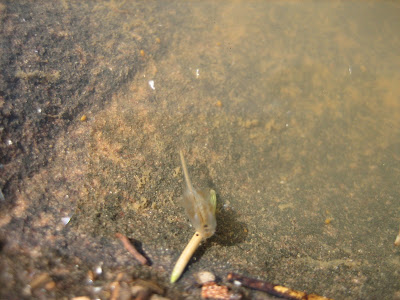 Tangent #2: If the “sea monkeys” (Tiñaja Monkeys? Let’s call them “T-Monkeys”…) If the T-Monkeys could think, what would their view of the universe be? Would they postulate the existence of anything outside their tiñaja? Of other tiñajas? Would they wonder whether their tiñaja had every been wet and full before the first rain and the infinite dryness that preceded it? Would they wonder if after the final end/evaporation of their universe whether rains would ever fill it again, bringing about another universe?

So I mentioned that Little Creek is covered with Piñon and Juniper. I’ve already written about Juniper. I haven’t yet written abut Piñon, but I will, and it’s a tree near and dear to my heart.

Tangent #3 – a little background on Piñons: Piñons are pines, specifically soft pines, that grow in arid desert or semi-desert environments in the US and Mexico.In the US, Piñons generally grow in “woodlands”, most commonly occurring with one of two species of juniper. All Piñons have wingless seeds, or nuts, which means that Piñons require a dispersal agent to reproduce and expand their range. In the , the most effective dispersal agents are Corvids, a group of birds that include Piñon Jays and Scrub Jays, and which we’ve talked about previously. Corvids harvest Piñon seeds, transport them some distance, and then bury them in underground caches. Because they cache more than they actually eat, some number of these buried seeds eventually germinate and grow into new piñons. After about 25 years, these new piñons develop nut-bearing cones, and the cycle is repeated. 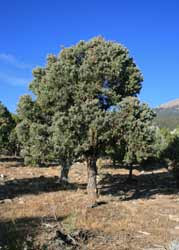 Paleobotanists believe that Singleleaf Piñon arose some 20 million years ago as a mutant offshoot of Colorado Piñon. The mutant population was somehow separated and thrived. Over millions of years the ranges of these two species ebbed and flowed across and the Western U.S countless times, driven by changes in climate and topography, until reaching their present ranges within the last 5,000 years.

On Little Creek, and in the area as a whole, the Piñons are Singleleaf.

Nested Tangent: On both Gooseberry and Little Creek I’ve occasionally found either 2-needled Singleleaf Piñons or Piñons that on which a specific limb is 2-needled. They’re probably just unusual 2-needled individuals (they do occur), but I wonder if some hybridization has happened around there. 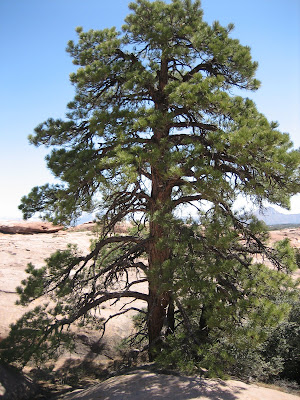 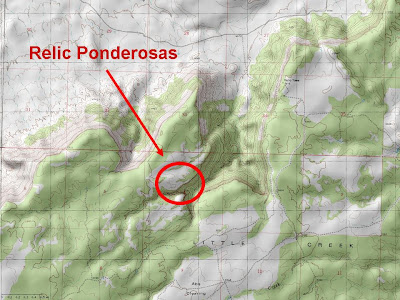 But as it turns out, Piñon is not the only pine on Little Creek. On one of the Northern “fingers of the mesa, in a broad slickrock bowl near the rim, is a scattered group of probably 40-50 Ponderosa Pines, Pinus ponderosa, (probably the most intuitive Latin name in botany). The Ponderosas grow only in crevices in the slickrock that appear to be much more well-watered relative to most of the mesa woodland. Many are quite large and old. There are no other Ponderosas that I know of in any direction for probably ~15 miles. 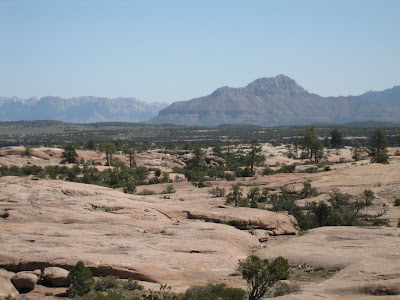 Though Piñons and Ponderosas are both pines, they only distantly related, not having shared a common ancestor in over 100 million years Piñons are “soft pines”, of the sub-genus Haploxylon, while Ponderosa are “hard pines”, of the sub-genus Diploxylon. The main difference: soft pines have a single fibrovascular bundle carrying nutrients along the length of each needle; hard pines have two. In short, Piñons and Ponderosas are about as closely related to each other as we are to wombats. 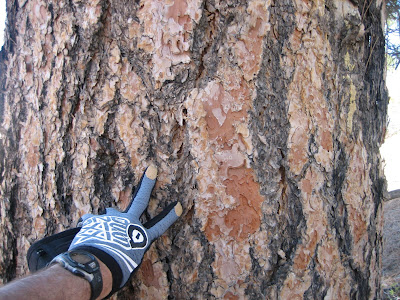 Since the ice age ended, the climate and vegetation in the Southwest has changed dramatically. We know that Piñons used to grow in Great Basin valleys that are now treeless, and that Ponderosas used to grow in the present-day Chihuahuan of at the foot of the . As the climate warmed, trees that required more cold and wet retreated Northward and or upward. 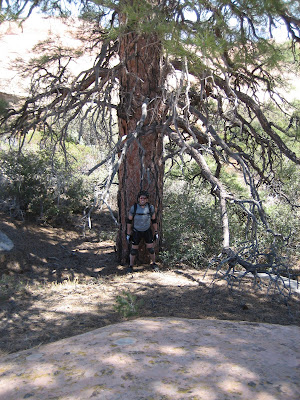 It’s likely that Little Creek was covered with Ponderosa forest sometime in the last 10,000 years. As the climate warmed and dried, they were steadily out-competed by Piñon and Juniper. And with the flat-topped nature of the mesa, there was no “upward” to retreat to. But here, in Big Pine Draw (my name), tucked into the well-watered crevices in the slickrock, they’ve made their last stand, holding their own in a hostile environment against huge numbers, like the Spartans at Thermopylae, and for whatever reason, the Piñons just can’t quite edge them out. I’ve visited the outskirts of the relic Ponderosas many times. But this time we dismounted and scrambled across the slickrock from pine to pine. In the crevices, the oldest biggest Ponderosas form shady mini-forest-pockets, with soft floors carpeted in long needles and duff. The slickrock here has a distinct pinkish hue, which adds to both the beauty and the strangeness of the draw. It’s an incredible place- a little remnant of an ice-age pine forest, set in the middle on an endless, slightly disorienting sea of slickrock and enchanted woodland.

Tangent #4: This area has a great archeological history. It was heavily visited by the Western Anasazi, and is today the site of Southern Utah University’s archeology school summer field digs. Several years ago I obtained a copy of the anthropology master’s thesis of James L. Heid from the UNLV library. Probably the most interesting part of Heid’s thesis was the discovery of sites dating clear back to the Basketmaker II period, indicating human presence dating back over 1500 years.

Nested Tangent: Mike and Morg Harris told me that when their grandfather was a boy, his father and his uncles would bring them up on Little Creek while they herded cattle. To pass the time, the Harris boy-grandfather and his cousins used to collect old Indian pots, line them up and throw rocks at them to break them. There are still numerous places along the trail network where potshards can be found.

I have never been a big fan of Gooseberry, but Little Creek Mt sounds fabulous. Next trip to St. Geo I'm totally going there.